The land probe team ask lands minister Betty Amongi about the Land Fund being non-operational since its establishment a decade ago.

The land probe team ask lands minister Betty Amongi about the Land Fund being non-operational since its establishment a decade ago.

PIC: Minister Amongi consults with her lawyer during the land probe committee on Wednesday - her second appearance before the commission in a row. (Credit: Denis Dibele)

KAMPALA - The land probe team spent the whole of Wednesday with the Minister of Lands, Housing and Urban Development, Betty Amongi discussing issue regarding the land fund.

The commission asked Amongi about the land fund being non-operational since its establishment 10 years ago.

The team wondered why the Land Fund was not operational with its own bank account yet the law requires that there shall be a separate account for the Land Fund.

Section 41 of the Land Act stipulates that there shall be Land Fund.

The Land Fund is a multipurpose resource basket with targeted benefi ciaries, including tenants seeking to buy or own land.

The fund is also used when the Government is seeking to buy land for redistribution to bona fide occupants or resettlement of the landless. It is also a loans basket to persons wanting to acquire titles or survey their land.

Amongi told the commission that her ministry had a discussion with Ministry of Finance in order to create an output in the budget but up to today, the fi nance ministry has not given a budget frame for the Land Fund.

She told the commission that it was discussed in one of the cabinet meetings that land transactions should first be verified by Cabinet and get its approval. 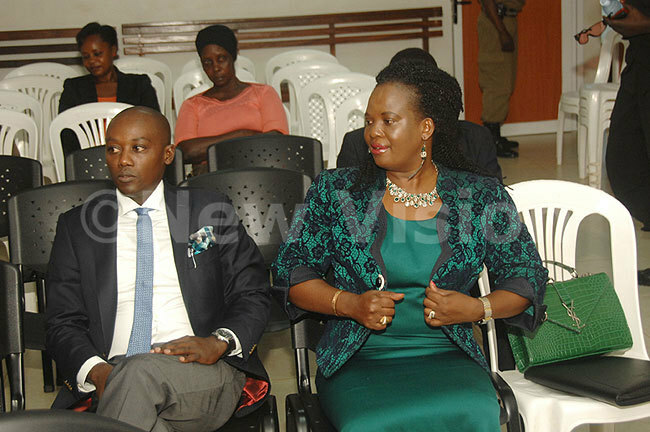 Amongi struck a look of confidence before the start of the probe on Wednesday. (Credit: Denis Dibele)

When asked why she wrote a letter to Albert Mugumya, the undersecretary of the Uganda Land Commission, directing him on who should be paid from the Land Fund, Amongi said she was not acting on her own, but on the directive of Cabinet.

Regarding the matter that she has been using a pseudomanager Henry Mubiru to steal government land, Amongi denied and dismissed the claims as untrue.

She told the probe team chaired by Court of Appeal Justice Catherine Bumugemereire that she had never fronted any pseudo person to steal government.

She was responding to the chairperson's questions over claims that she has been using her position to grab government land.

"I can produce Henry Mubiru who is my worker (managing director of Amobet Investments Limited), before this commission," Amongi said.

Without delving further into the issue of the departed Asians properties, Amongi said there are over 500 properties with disputes.

Justice Bamugemereire had put it to Amongi that the commission has obtained information that she has been using Pastor Daniel Walugembe and Henry Mubiru to steal land.

The commission's mandate is to probe efficiency of the laws, policies and processes of land registration, acquisition, administration and management.

It is also tasked with scrutinising the work of relevant bodies in the reservation of wetlands, forests, road reserves, and national parks, among other gazetted spaces.

The probe is mandated to investigate and inquire into the role of the ULC in administering public land and the Land Fund.

How we use our money: Students speak out

How alcohol, drugs get into schools