EGYPT- President Yoweri  Museveni  is in Cairo, Egypt for a three-day State visit on the invitation of the Egyptian president Abdel Fattah El-Sisi.

"Upon arrival, I held a bilateral discussion with His Excellency El-Sisi and we later witnessed the signing of agreements in areas where our countries will co-operate. These include energy, agriculture and trade," Museveni tweeted.

President Museveni and his Egyptian counterpart witnessed the signing of a bilateral agreement and executive contract for establishment of 4 Megawatts solar power project in Busia, Uganda.

The power plant is expected to increase access to electricity in the Eastern part of the country, improve livelihoods and boost growth in the area.

Uganda and Egypt will co-operate in different fields of agriculture as well.

It was also agreed upon that Uganda Investment Authority and Egyptian Industrial Development Authority (IDA) co-operate in establishing industrial parks and participate in each other's exhibitions and fairs.

The Egypt Export Development Authority and Uganda Export Promotion Board will work together to increase bilateral trade.

Museveni congratulated El-Sisi on his resounding victory in the presidential elections held in March 2018, saying the landslide win attested to the confidence and trust the Egyptian people have in his leadership. 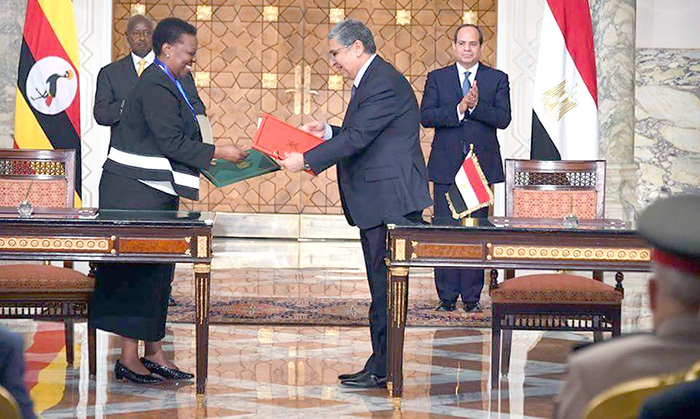 The Heads of State reiterated their commitment to the achievement of the objectives of the African Union's Agenda 2063 and in particular, the economic integration of Africa to accelerate economic transformation, industrialisation and improvement of the livelihood of citizens.

In this regard, they stressed that the signing of an agreement establishing the African Continental Free Trade Area was a significant milestone.

They underscored the need to fast track infrastructure development, particularly energy, railways, roads, and waterways to improve connectivity across the continent.

Both Heads of State commended the outcome of the second session of the Joint Ministerial Commission between the two countries held from May 5 to May 7, 2018 in Cairo.