MENU
Parliament moves to save UN base in Entebbe
Previous Story

As it happened: Chinese Evening at New Vision
Next Story

The few public toilets in the affected areas are full and when they over flow, the waste from the latrines ends up in the water bodies.

The few public toilets in the affected areas are full and when they over flow, the waste from the latrines ends up in the water bodies.

PIC: Lord Mayor Erias lukwago, KCCA councillors and directors and other ministry of health officials inspecting some of the water springs in Kinawataka which are said to be supplying contamianted water. (Credit: Ashraf Kasirye)

KAMPALA- Following the cholera outbreak in the city, today a technical and political leadership of Kampala Capital City Authority (KCCA), along with National Water and Sewerage Corporation (NWSC) and Ministry of Health visited areas that are hit and affected by the epidemic.

While in Nakawa, Mbuya, Kinawataka and Kalerwe, the team established that most of the suburbs lack latrines and residents rely on contaminated water from natural water springs.

Speaking to New Vision, Dr Najib Lukooya, the KCCA deputy director for environment and sanitation, admitted that its true most areas lack toilets, but the problem is bigger than just toilets and clean water.

He pointed out that poor physical planning and unregulated occupation and construction of household structure in swampy areas such as in Kinawataka, is one of the issues affecting the residents.

He said all these factors make it difficult for KCCA to plan for better public toilet structures, yet the people themselves cannot afford constructing water borne toilet facilities.

"The area is so congested, yet the houses are located in a swamp. KCCA has spent over two years trying to sensitise people to build and own toilets and indeed some of them have complied, but the problem remains big as long as the physical plan of the slums is not revised and streamlined," he said. 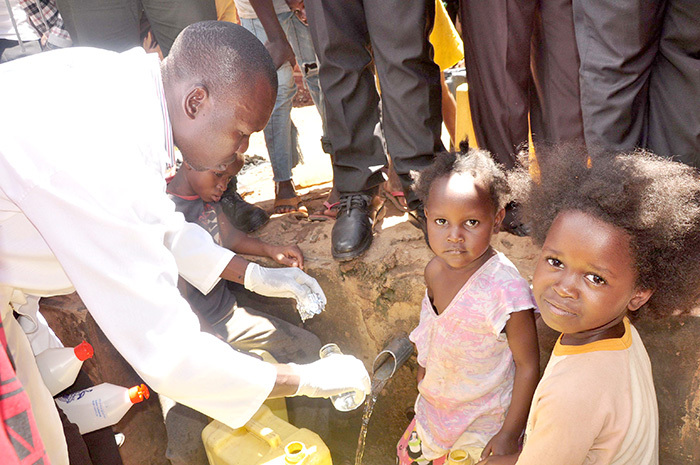 He added that even the few public toilets in the affected areas are full and when they over flow, the waste from the latrines ends up in the water bodies.

Lukooya attributed the epidemic to the increasing rains which affect the toilets since the residents have constructed in low line areas.

During the tour, the Lord Mayor Erias Lukwago, said the Government has so far failed to invest in water in Kampala. He said the residents reported to him about the high prices of water from NWSC which they cannot afford.

"This is a challenge to KCCA to see that in the 21st century, people are still drawing water from contaminated spring wells. However, we are not going to only keep lamenting, we are engaging the relevant ministries to have our budget realigned to specific basic interventions such as this one of safe water," He said.

Lukwago said in the realigned budget, his council has planned for water borne community toilets, which they hope to construct in every division of Kampala, especially slums.

One of the residents of Katogo in Kinawataka, who did not want to be identified, said she neighbours Kireka Police Barracks, but she has consistently suffered the sewage stench which is usually released from the barracks and it flows in her direction.

She said her home also neighbours a natural water spring and  claims that the sewage from the barracks usually follows into the water, which is eventually consumed by residents.

Mungyera Gordon, another resident, told KCCA officials that they need to initiate talks with the Police barracks over the same matter and also caution residents against dumping of garbage.

Edisa Nakibuye, a resident of Katoogo, confessed to the KCCA officials that their village has only one toilet which was constructed years ago by the city council.

"We do not have money to build private toilets and above all, there is no land for us to own homesteads and toilets," she said.

Lord Mayor Erias lukwago and other officials  inspecting some of the areas in Kinawataka which were hit by the cholera epidermic. (Credit: Ashraf Kasirye)

Martha Nakalema, another resident of Katoogo, said  the entire area relies on contaminated water because most of the sewage drainages flow into natural water springs. We cannot afford to buy a jerrycan of water at sh500, yet we need more than one jerrycan per day" she lamented.

She added that until NWSC reduces the water prices, they will continue relying on the free water from the springs.

According to the KCCA Nakawa division health surveillance officer, Joel Ssematimba, KCCA has always suffered the effects of open defecation in areas of Mbuya and Kinawataka, and although they continue to sensitise people against it, their efforts are still in vain.

The team also visited Naguru hospital where the isolation unit of cholera patients was established and Mulago hospital where another camp was set up yesterday by the Ministry of Health.