From Laba Arts Festival to Azulato Childre...
Next Story

KCCA granted approval for construction of two-storey structures in 2015

KCCA granted approval for construction of two-storey structures in 2015

Police fire brigade sift through debris in search of survivors after the building collapsed. Photo by Eddie Ssejjoba

The owner of the building which collapsed on Sunday in Buziga defied a directive from Kampala Capital City Authority (KCCA), the director physical planning, Moses Atwine, has revealed.

Atwine made a report to city councillors on the state of the construction site where one person was killed and left others injured, near Buziga Country Resort.

At least 23 workers, including a security guard, were on Sunday rescued from the site where two apartment blocks under construction collapsed.

Atwine said KCCA granted approval for construction of two-storey structures in 2015 and after which construction commenced.

He explained that when KCCA returned to the site to inspect works, they found that the owner had gone against what the Authority had approved, and that a three-story structure was being put up. 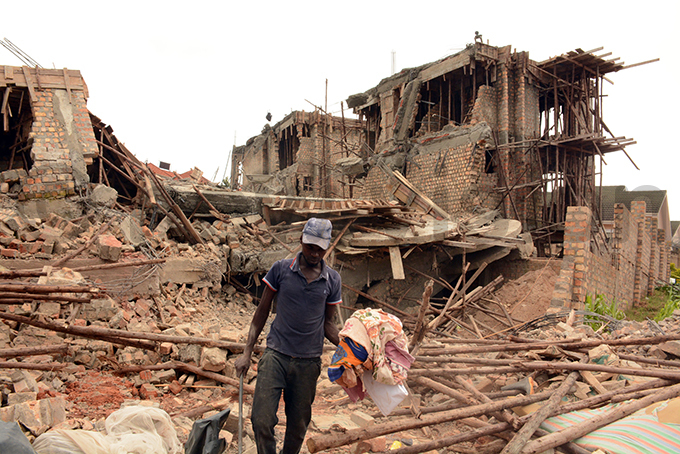 "The directorate of physical planning stopped the proprietor and issued him a notice halting works, but he continued," Atwine told the council. He added that by April 11, the second storey was ready for roofing, and that construction of two more storeys was ongoing.

The deputy executive director, Samuel Sserunkuuma, explained that the owner of the structure will be arrested and charged for defying the Physical Planning Act 2010.

KCCA also identified the owner of the construction site as Patrick Byakisakye, an architect.

Sserunkuuma said that the site engineer, Fred Mubiru, and Byakisakye will be prosecuted in the courts of law.

Three things we learned from Liverpool's win over Man City

Three things we learned from the Community Shield