At least 22 workers and one security guard were rescued when the building collapsed at about 10:30am on Sunday.

At least 22 workers and one security guard were rescued when the building collapsed at about 10:30am on Sunday.

PIC The Police search the debris looking for workers suspected to be trapped  in the rubble when of a collapsed three-storey building at Buziga-Munyonyo, a Kampala suburb. Photos by Eddie Ssejjoba

At least twenty-three workers including a security guard were on Sunday rescued from a building site at Buziga-Munyonyo Kampala suburb when two blocks of apartments under construction collapsed.

By press time, the Police were still searching for people who were suspected to be trapped in the debris.

Survivors told the Police that they suspected three people who were sweeping on the ground floor to be trapped under the wreckage.

The owner of the building, only identified as Patrick was not at the site when the building gave way at about 10:30am. However, residents rushed to the scene and pulled out a female cook and another worker identified as Richard Tumukunde.

The two were rushed to the nearby health facilities for treatment. Other workers including a security guard escaped with minor injuries.

The commissioner in charge of disaster, fire and rescue in the Uganda Police Force, assistant commissioner of Police, Hassan Kihande, told the New Vision that the Police responded and arrived at the site moments later.

He said the Police provided an army excavator and a backhoe and hand grinders, to help dig through the debris as they search for the three workers who were unaccounted.

Kihanda said the Police had embarked on investigations to establish the cause of the accident adding that they would take samples of the construction materials including the cement used, irons bars for examination.

He said the Police would also investigate whether the building had a qualified engineer and whether he had followed the construction principles.

Preliminary investigations, however, according to Kihanda, indicated that the constructors had not followed procedures such as erecting a sign post to give details of the project.

"We are right now depending on rumours that the engineer had left and was replaced after he disagreed with the owner of the site who wanted to change the building plan," Kihanda said.

Kihande said he had talked to the owner of building on phone, but he too was still in shock.

Some of the survivors said they were casting concrete on the top floor when they had a bang adding that they fell in different directions as the two blocks gave way at the same time. 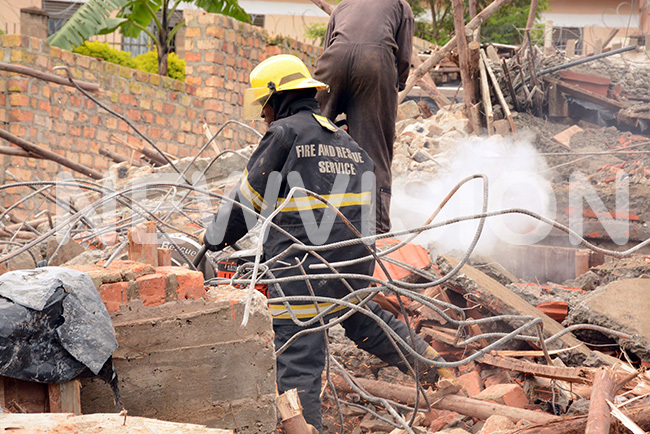