TOP Football STORY
3 years ago .
Liverpool to play Real Madrid in Champions League final
After a 5-2 first-leg win last week, a 4-2 defeat on the night could not prevent five-time champions Liverpool from reaching their first final since 2007.

Liverpool held off a spirited Roma fightback to reach the Champions League final 7-6 on aggregate despite losing 4-2 in a hectic semi-final second leg in Rome.

Jurgen Klopp's reached their eighth European Cup final and first since 2007 where they will play two-time holders Real Madrid in Kiev on May 26.

First-half goals from Sadio Mane and Georginio Wijnaldum put Liverpool in control as Roma conceded their first goals in the Stadio Olimpico during the European campaign.

But despite Radja Nainggolan bagging two goals for Roma in the final eight minutes -- the second from the penalty spot -- there was to be no second miracle comeback for the Italians after last month's 3-0 win over Barcelona in Rome. 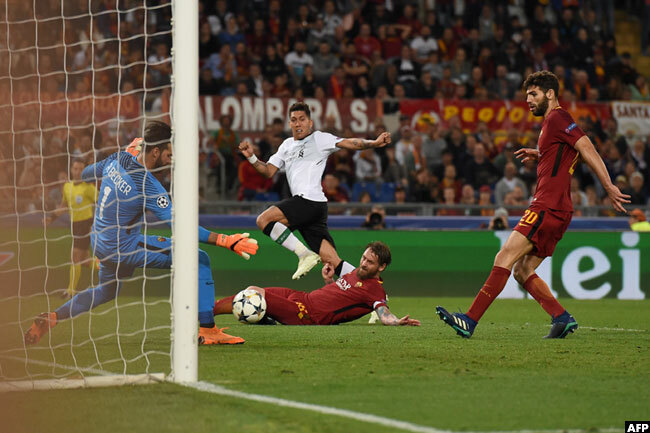 It was another bitter defeat for Roma who lost the 1984 European Cup final to Liverpool on penalties.

Roma threatened early with Alessandro Florenzi sending the ball wide in the opening minutes but the hosts paid for woeful defending, giving Klopp's side space to gain an early advantage.

Senegalese forward Mane got Liverpool off to a dream start after just nine minutes to the horror of the home fans.

A Nainggolan howler in midfield gave Roberto Firmino the opportunity to barge through, delivering the ball to an unmarked Mane who left Roma 'keeper Alisson with no chance.

But six minutes later Roma got the equaliser when Liverpool defender Dejan Lovren's attempt to clear a Stephan El Shaarawy header towards Dzeko across goal bounced off James Milner's head, flying past Loris Karius and into the Liverpool goal.

Liverpool's ticket to the final in Kiev looked well and truly booked after 25 minutes when Wijnaldum nodded in. 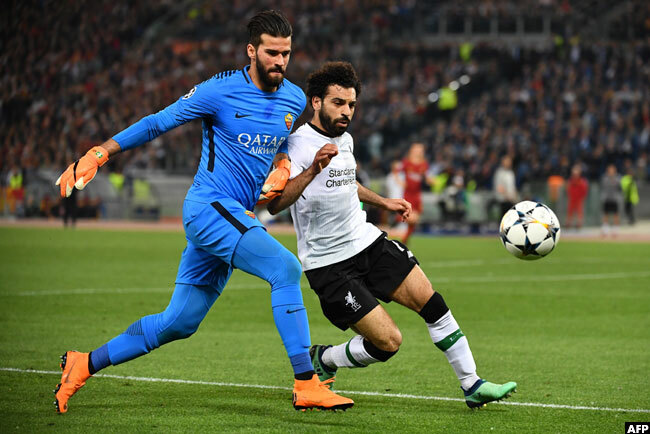 Stephan El Shaarawy rattled the post on 35 minutes with Florenzi also firing wide, and Pellegrini showed how not to take a free-kick which was way off the mark.

Dzeko broke through seven minutes into the second half with the equaliser after Karius cleared the ball straight into the path of the Bosnian who made no mistake for his eighth goal in 12 European matches.

And in a desperate scramble by the Italians in front of goal four minutes from time Nainggolan made up for his earlier blunders when he drilled a low shot into the bottom-right corner from a distance for his first ever European goal.

The Belgian midfielder added a second three minutes into injury time from a penalty awarded for a bitterly contested handball by substitute Ragnar Klavan, firing into the roof of the net.

It was a dramatic finale for Eusebio di Francesco's side but it was too little too late as they failed to reach their first final since 1984 but earned a standing ovation from the 62,000 crowd.

Liverpool will again leave Rome victorious after winning the European title twice, in 1977 and 1984, at the Stadio Olimpico.

Here are three things we learned from the Reds' dramatic 4-2 defeat in the semi-final second leg at the Stadio Olimpico:

Inspired by dreams of restoring Liverpool to their former glory, Jurgen Klopp joined the Reds three years ago to experience unforgettable nights like this. By leading Liverpool to their eighth European Cup final, Klopp confirmed his reputation as a revolutionary with a unique skill for galvanising moribund teams.

Asked earlier this week what it would mean to set up a heavyweight showdown with holders Real Madrid in the final, Liverpool boss Klopp spoke eloquently about drawing on a youthful love of the game. "It is a childhood dream to make it to the Champions League final. We are here to fight for our dreams," he said.

The moment Klopp realised he was about to achieve his ambition came in the 25th minute when Georginio Wijnaldum headed Liverpool's second to leave Roma needing to score four. Usually so animated on the touchline, Klopp pumped his fists, but didn't celebrate wildly.

Instead, he wore a beatific smile that suggested he knew the promised land was within sight. It was just reward for the coaching masterclass Klopp has delivered in this season's Champions League. Having out-witted Manchester City manager Pep Guardiola in the quarter-finals, Klopp -- drawing on the knowledge gleaned from leading Borussia Dortmund to the 2013 final -- out-manoeuvered Roma boss Eusebio Di Francesco so emphatically in the first leg that even Roma's late goal blitz in the return wasn't enough to stop the Reds setting up a repeat of the 1981 final.

The five-time European champions were back at the venue where they won two of those trophies, but, while respectful of that glorious past, Klopp is focused on making history of his own. Now the Reds are one win away from joining the immortals.

Wijnaldum rises to the occasion

Georginio Wijnaldum claimed he had no problem resting in the build-up to Liverpool's biggest match for a decade, but the ice-cool Dutch midfielder's crucial contribution left Roma facing sleepless nights for weeks to come.

Wijnaldum was called up to replace Alex-Oxlade Chamberlain, who was ruled out with a serious knee injury sustained in the semi-final first leg, and he rose to the challenge with a composed display capped by Liverpool's vital second goal.

With the match level at 1-1 and Roma eyeing a stunning fightback, Edin Dzeko inadvertently directed the ball back to Wijnaldum, who headed past Alisson before sprinting off to celebrate with the club's head of fitness Andreas Kornmayer. No wonder Wijnaldum was so happy -- it was his second goal of the season and his first since October.

It was the former Newcastle star's first away goal in three years with his two English clubs. He was also the first Dutch scorer in a Champions League semi-final since 2013, when Arjen Robben netted for Bayern Munich.

Roma had staged one of the Champions League's greatest fightbacks when they beat Barcelona 3-0 in the quarter-final second leg in the Stadio Olimpico to overturn a 4-1 first-leg deficit.

Bidding to reach the European Cup final for the first time since their penalty shoot-out defeat against Liverpool in 1984, the Serie A side needed an early goal to emulate their Barca heroics. Desperate to fire up his players, Di Francesco had called for them to deliver "a copy and paste" of that astonishing performance.

But Di Francesco had been exposed as tactically naive with his decision to go for all-out attack in the first leg and it was no different this time as Roma were in tatters before half-time.

Roma were the only team not to concede a goal at home in the Champions League this season, yet within nine minutes Liverpool had torn through the hosts' poorly organised defence. Throwing bodies forward far too soon, Roma were caught cold by Sadio Mane before more woeful defending allowed Wijnaldum to head Liverpool's second. Despite a superb second-half response, that deficit was too much to overcome.