The collapse in 2014 of the price of crude oil, which provides 70% of all revenues and nearly all hard currency, put immense pressure on the country to diversify.

The collapse in 2014 of the price of crude oil, which provides 70% of all revenues and nearly all hard currency, put immense pressure on the country to diversify.

PIC Angola is looking to develop its fishing sector, which also produces goods for the cosmetics, pharmaceuticals and farm industries. (AFP)

Angolan President Joao Lourenco has named diversifying the oil-dependent economy as his top priority after he became the country's first new leader in 38 years.

And one natural and readily available resource that has been identified is fish -- but a lack of equipment and know-how has meant the industry has struggled.

Lourenco, part of the MPLA party that has ruled Angola since 1975, took office in September promising to deliver an "economic miracle" that would transform the southern African nation, where the UN says more than half of the population lives on less than $2 a day.

The collapse in 2014 of the price of crude oil, which provides 70 percent of all revenues and nearly all hard currency, put immense pressure on the country to diversify.

Even though global oil prices have since recovered somewhat, Lourenco still plans to push forward.

He is betting the 1,600 kilometres (1,000 miles) of Atlantic coast could provide a fishing bonanza.

"The diversification of the economy is our priority," Lourenco said recently. "We're going to relaunch fishing and agriculture and we will open the country to foreign investment."

To demonstrate his commitment, Lourenco visited fish factories in Tombwa on the southwest coast.

One of the sites is equipped to freeze the catch, while the other processes fish into oil and fishmeal.

Fish oil is highly sought after by the cosmetics and pharmaceutical industries, while fishmeal is used by farmers as animal feed.

Lourenco vowed to "improve the infrastructure to support fishing and the transformation of processing", according to the government's latest six-year plan.

Fishing minister Victoria de Barros previously announced plans to build a new port with refrigerated storage in Tombwa at a cost of $23.5 million.

The government is seeking to increase the annual fish catch by 16 percent over the next four years to 614,000 tonnes. Meanwhile, it is aiming for a 50 percent increase in fishmeal production to 30,000 tonnes over the same period. 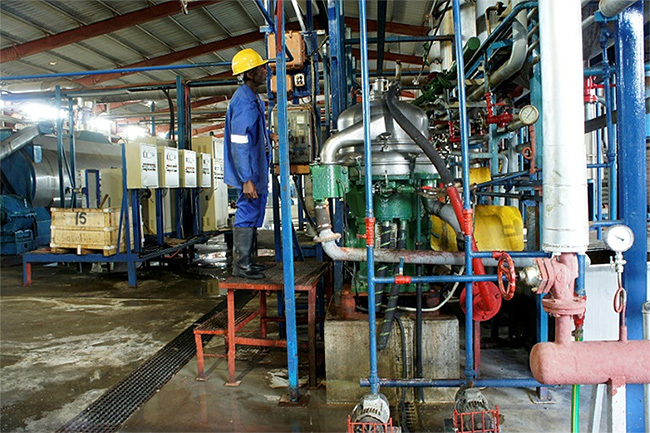 The Pesca Fresca factory transforms frozen fish into fishmeal and oil, which is then exported. (AFP)

'Our salvation was fishing'

Reducing dependence on oil is proving to be a tough task for a country that has been heavily dependent on the black gold for decades.

"We have a fish industry but we don't have the capacity to meet international demand," said Jose Gomes da Silva, the government director of fishing in the coastal city of Benguela.

In the city, the fishing sector employs thousands of people -- a "very important" economic force, according to Da Silva. But more could be done.

In the Baia Farta, 30 kilometres (18 miles) from Benguela, the privately owned Pesca Fresca business transforms frozen fish into fishmeal and oil, which is then exported to South America, China, Namibia and South Africa.

As well as being supplied by industrial fishing ships, Pesca Fresca sources some fish from small-scale fishermen like Orlando Eduardo.

"Our salvation was fishing," said 32-year-old Eduardo, barefooted and sporting a hat.

Fishermen like Orlando gather on the sun-baked beach to drop off their catches of sardines, bass and mackerel from their small, colourful wooden boats.

Angola has a critical lack of large fishing ships and processing factories. A lack of spare parts means those it has often languish in harbour.

To stimulate fishing, the government recently announced the purchase of a specialised fishing vessel for $3.7 million.

But experts are unconvinced that such acquisitions will make a significant impact.

Some economists have also greeted Lorenco's ambitious plans with scepticism.

"The fishing industry represents less than one percent of GDP," noted Alves da Rocha of the Catholic University of Angola.

Nkoyooyo calls for peace in Lango

Nkoyooyo calls for peace in Lango