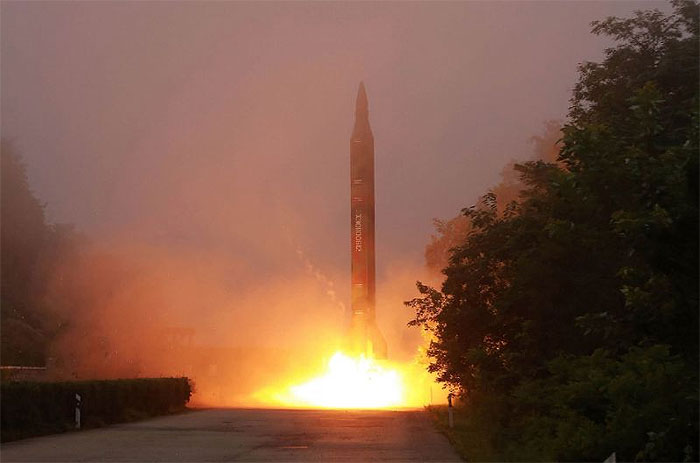 North Korea has promised to shut its atomic test site within weeks and invite American weapons experts to verify its closure, Seoul reported Sunday, as new US Secretary of State Mike Pompeo said Washington had an "obligation" to pursue peace.

North Korean leader Kim Jong Un -- who may meet US President Donald Trump as early as next month -- also said Pyongyang would have no need for nuclear weapons if it were promised it would not be invaded, according to Seoul.

Washington's new chief diplomat said he and Kim held in-depth talks about a denuclearisation "mechanism" when they met over Easter.

"We have an obligation to engage in diplomatic discourse to try and find a peaceful solution so that Americans aren't held at risk by Kim Jong Un and his nuclear arsenal," Pompeo told ABC, saying there is a "real opportunity" for progress.

He was speaking as the Blue House in Seoul reported Kim told Moon during the summit he would close the North's nuclear test site in May.

Kim also said he "would soon invite experts of South Korea and the US as well as journalists to disclose the process to the international community with transparency", Seoul's presidential spokesman Yoon Young-chan added.

Tensions spiked last year over the North's testing of atomic weapons and long-range missiles, including some capable of reaching the US mainland.

"Kim said 'the US feels repelled by us, but once we talk, they will realise that I am not a person who will fire a nuclear weapon to the South or the US or target the US'," according to Yoon.

The North Korean leader reported added: "If we meet often (with the US), build trust, end the war and eventually are promised no invasion, why would we live with the nuclear weapons?"

"As they will see once they visit, there are two more tunnels (at the test site) that are even bigger... and they are in good condition," he was quoted as saying. 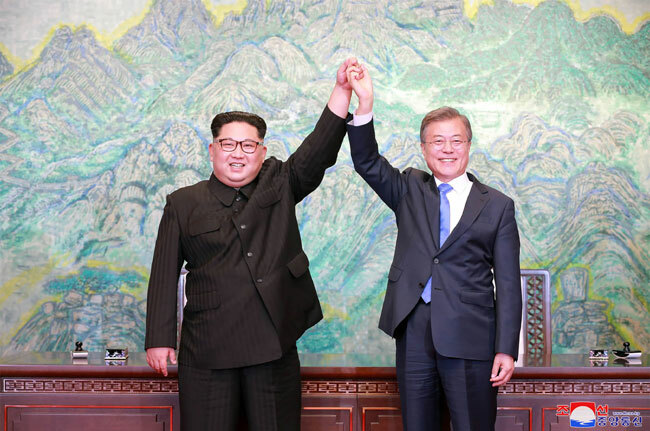 North Korea's Kim Jong Un (left) and South Korea's President Moon Jae-in showed solidarity during a signing ceremony near the end of their historic summit at the truce village of Panmunjom.(AFP/KCNA/KNS)

The remarks are likely to be seen as a sweetener ahead of Trump's eagerly-awaited summit with Kim, which the US president said would take place "in the next three or four weeks".

Trump touted his ability to achieve a nuclear deal with the regime at a campaign-style rally in Michigan to cheers and chants of "Nobel! Nobel!"

The US leader has been eager to play up his role in achieving a breakthrough with Pyongyang through his "maximum pressure" campaign involving tough rhetoric, stronger sanctions and diplomatic efforts to further isolate the regime.

"Months ago, do you remember what they were saying? 'He's going to get us into nuclear war, they said,'" Trump told supporters in Washington Township, north of Detroit.

"No, strength is going to keep us out of nuclear war, not going to get us in!"

But Trump also sounded a note of caution, saying he was prepared to walk away if US demands for North Korea to relinquish its atomic arsenal were not met.

Trump held phone calls earlier Saturday with both Moon and Japan's Prime Minister Shinzo Abe, declaring "things are going very well", as CBS News reported that Mongolia and Singapore are the final two locations under consideration for his meeting with Kim.

Pyongyang has demanded as-yet-unspecified security guarantees to discuss its arsenal, but Kim could use the Trump meeting to agree on "the range of nuclear weapons and facilities to be dismantled and specific timeframe to do so", said Hong Min, an analyst at the Korea Institute for National Unification.

But Kim's remark about his personal good intentions may be aimed at using Trump's "troubling tendency to take authoritarian rulers at their word," said Adam Mount, a senior fellow at the Federation of American Scientists in Washington.

Trump's new National Security Advisor, John Bolton, cited Libya's decision to give up its nuclear programme as a model for North Korea. 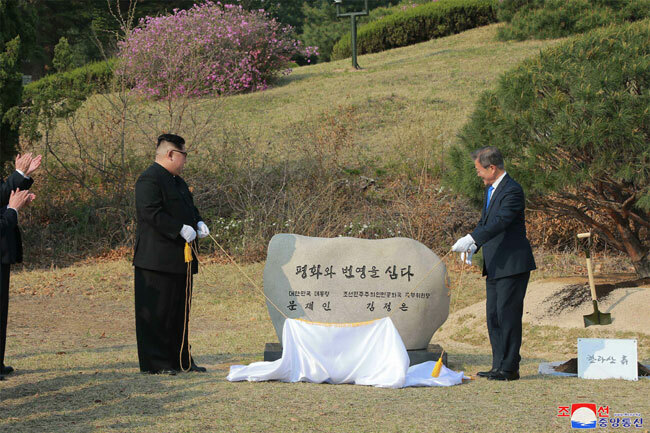 Kim Jong Un and Moon Jae-in participated in a tree-planting ceremony next to the Military Demarcation Line that forms the border between the two Koreas at the truce village of Panmunjom. (AFP/KCNA/KNS)

Kim and Moon said at their summit that they had a "common goal of realising, through complete denuclearisation, a nuclear-free Korean Peninsula."

But the phrase is a diplomatic euphemism open to interpretation on both sides.

Pyongyang has long wanted to see an end to the US military presence and nuclear umbrella over the South, but it invaded its neighbour in 1950 and is the only one of the two Koreas to possess nuclear weapons.

The two leaders also pledged in a joint statement to formally end the Korean War, which ceased in 1953 with an armistice rather than a peace treaty.

And in another conciliatory gesture, Kim said he would move North Korea's clocks 30 minutes forward to unify with the South's time zone.

Pyongyang changed its standard time to half an hour behind the South in 2015.

North Korea's parliament on Monday adopted a decree to return to the same time zone as South Korea from May 5, the North's official KCNA news agency said.