MENU
The Handshake: Why a 1% tax on Mobile Money
Previous Story

Tycoon Vincent Bollore (pictured) is by far the most prominent business leader to be investigated in France for suspicious activities in Africa.

Tycoon Vincent Bollore (pictured) is by far the most prominent business leader to be investigated in France for suspicious activities in Africa.

A spectacular probe into French tycoon Vincent Bollore over suspected graft in Africa marks a rare exception among corporate titans doing business south of the Sahara.

Bollore, charged on Wednesday over contracts to operate ports in Guinea and Togo, is by far the most prominent business leader to be investigated in France for suspicious activities in Africa.

Campaigners have hailed the development as a break from decades of judicial indifference or nods and winks from the government over dubious deals in the former French colonies.

The investigation stems largely from laws that are less than 18 months old. The so-called Sapin II Law, passed in December 2016, compels French firms to take preventive steps against graft.

It also beefs up measures dating back to 2000 that enable punishment of corrupt practices used to win public contracts abroad.

Under Sapin II, "corruption is punishable in all circumstances and in any place, even it is a crime committed abroad", said Thierry Dal Farra, director of the public business law department in UGGC Avocats, a large Paris-based firm of attorneys.

The tougher legislation came after years of criticism by the Organisation for Economic Cooperation and Development (OECD) and specialised NGOs which accused France of turning a blind eye to corporate corruption abroad.

The Bollore probe breaks new ground in France -- but the United States already goes much further.

Its prosecutors are empowered to pursue non-American companies for economic crimes committed outside US soil -- such cases often culminate in hefty fines.

If France is a European example of tighter regulation, ferocious competition from China -- the main trading partner of the African continent -- is deemed a hurdle to abolishing bad practices.

"Emerging nations that will take decades to incorporate ethical concerns into their search for market share" are a major obstacle, said William Bourbon, head of an anti-corruption association called Sherpa.

"The most stereotypical are the Chinese, who intimidate the entire world and who, when it comes to corruption in Africa, act with complete impunity," he told AFP. 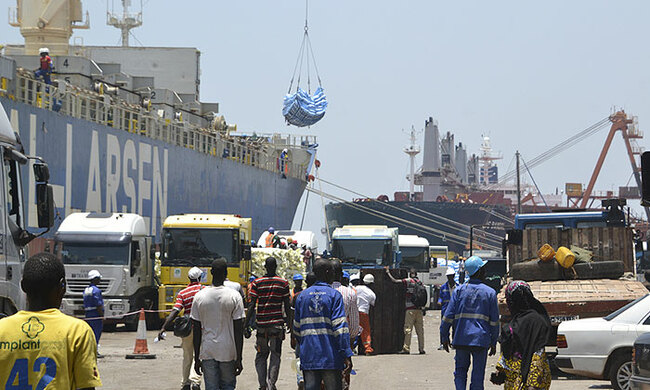 A picture of the autonomous port of Conakry. (AFP)

"We would really like everybody to play by the same ground rules. We need competitors who are subject to the same requirements, shared regulations and reciprocity," said a spokesman for MEDEF, France's principal employers' organisation.

Many African countries are only too well adapted to underhand deals. Most of them languish among the bottom ranks of the annual Corruption Perceptions Index compiled by Transparency International.

"What matters most is for African governments to adopt a practice of zero tolerance concerning corruption. If this is done, wherever investors come from, they will have to abide by the laws," said Samuel Kaninda, African regional advisor for Transparency International.

"The problem is not a lack of legal instruments (in Africa)," he added. "It is that the institutions that fight against corruption suffer from a lack of independence at the political level."

Setting a rare example, South Africa recently reopened legal proceedings against a subsidiary of French arms manufacturer Thales in an old case of alleged corruption. Former president Jacob Zuma has been charged with 16 counts of graft.

Beyond legislative measures, activists argue that whistleblowers remain key to efforts to clamp down on corruption.

"Whistleblowers are the worst enemies of a particular kind of financial elite," said Bourdon.

"They are the ones who smash the locks, giving access to secrets."

Last year, Bourdon became part of an international team that established a Platform for the Protection of Whistleblowers in Africa, based in Senegal's capital Dakar.

With lawyers listed in almost a score of African countries, the association offers legal and technical assistance to whistleblowers at risk and an online archive of cases in French and English.