Toro Queen Mother to appear before land probe
Next Story

“Clients and businessmen coming to Uganda today will be looking for lawyers who act professionally and are competent," says Bart Katureebe.

“Clients and businessmen coming to Uganda today will be looking for lawyers who act professionally and are competent," says Bart Katureebe.

PIC: Chief Justice Bart Katureebe (2nd-left) receives a painting of himself from members of the  Makerere Law Society at their annual dinner in Kampala. Left is Apollo Makubuya, Buganda's third Prime Minister and a lecturer and Joseph Kyazze (right), a lecturer. (Credit: Eddie Ssejjoba)

The Chief Justice, Bart Katureebe, has warned lawyers against unethical conduct and unprofessionalism, saying the days of legal practitioners fixing deals and shortchanging clients are gone.

"The days of leaving university and thinking you will become a private lawyer and fix deals and shortchange clients are getting numbered," he said.

He was speaking at the Makerere University Law Society annual dinner in Kampala at the weekend.

Katureebe warned that the judiciary had toughened its grip on unethical conduct of lawyers, who he said cheat and defraud their clients.

He said many lawyers in private legal practice are facing the disciplinary committee of the law council and would not be allowed to do business.

"Clients and businessmen coming to Uganda today will be looking for lawyers who act professionally and are competent. But if you are a lawyer whose name is before the law council, you will not get them."

On his part, the Director of Public Prosecutions (DPP), Mike Chibita, advised young lawyers to always keep time, saying there was nothing annoying to judges than lawyers arriving late in court, which he said made many lose cases.

He also asked them to always be versatile and venture into new subjects in the criminal law, including cybercrime, which he said had become a major subject.

Others areas are terrorism and computer misuse.

Chibita also asked them to venture into leadership, saying society always looked forward to lawyers for their good leadership traits. 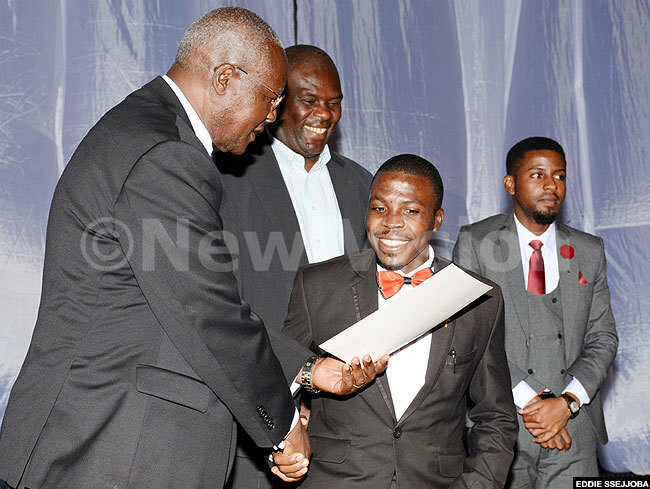 Ferdinand Tumuhimbise, who received the highest CGPA among the first class honours in 50 years, receives an award from the Chief Justice

Meanwhile, the Chief Justice lashed out at some judges and magistrates that frustrate people seeking justice in courts of law.

"I have been getting complaints where people grumble about judges and magistrates for denying them justice and accusing lawyers they hire of having been bought.

"The problem is much bigger to members of society."

According to Katureebe, a recent research showed that 95% of people with justice needs in Uganda do not know where to go, which he said means there is a big market for lawyers.

There is still a big challenge "to make sure people access our services and ensure we don't interchange them".

He also warned students against forging academic papers, saying a judge recently was dismissed after being found to have entered university using someone's papers.

"We must think of re-instilling integrity and ethical behavior in our students and in ourselves. It is not all about money, money is good and we all want money, but I think you sleep easier when you have made money with integrity, with ethical conduct, with professionalism," Katureebe said.

At the event, outstanding students who received first-class degrees in the last 50 years, members of the Makerere Law Journal, lecturers and students were given accolades.

The function was attended by Justice Geoffrey Kiryabwire, the association patron, former president of Uganda Law Society Ruth Ssebatindira and Dr. Monica Chibita, among others.