Action between Roman Reins/Braun Strowman and Gallows and Karl Anderson during a tag team match at the TicketPro Dome in Johannesburg during the WWE live show. PHOTOS: Michael Nsubuga

South Africa fans got a feel of the WWE live action in three shows that were staged for the crazy wrestling fanatics in Cape Town, Pretoria and Johannesburg over the weekend.

The ambiance, the sound, the lighting was all perfect for the show and the fans' involvement all made for a perfect WWE show that left the fans yearning for more.

One thrilled lady fan after the show said she wouldn't mind having the stars again in one months' time. From the attendance, you could tell that it was mostly the children who dragged their parents in and their voices were prominent during the event as they chorused the stars' popular taglines and songs. 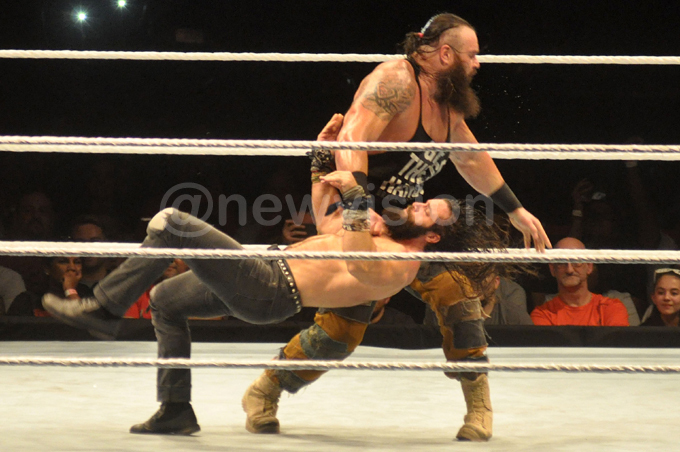 It was a spectacle watching the wrestlers somersault, jump over ropes and exhibited great athleticism to the thrill of the revelers.

When Lion AJ pulled out his guitar and belted out "I say do you love a lion' the fans roared in unison before he threw an insult saying; "Oh it feels good to be loved. I just wish I would be loved by people who actually matter; I mean what I'm I even doing here, I just don't care who is out there tonight," said before he received all kinds of boos from the crowd. "I'm just the biggest musical icon on this planet or do you think there is a bigger story than me? I dare anyone who think they are better musicians than me to step out tonight,"

The crowd went wild when South African musician AKA stepped in the ring to dare the wrestler who ‘challenged him to bring out what he has got. AKA just thrilled the audience the more when he replied; "Do you have an idea where you are…you had to come here to see a real superstar," AKA said before the Lion took on Joe Samoa. 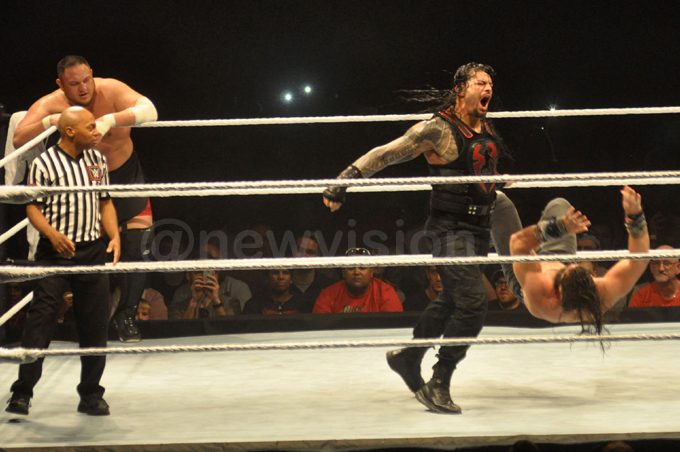 The main event was between a tag team match between Braun Strowman/ Roman Reins and Gallows and Karl Anderson.

WWE LIVE SOUTH AFRICA was promoted by Big Concerts and presented in partnership with SuperSport, Africa's premier sports broadcaster on MultiChoice Africa that airs WWE programming in more than 50 countries and territories throughout sub-Saharan Africa.

SuperSport channels S3, S4, S9 and SS10 televise Raw on Tuesdays and SmackDown Live on Wednesdays, offering both live telecasts and same-day re-airs, and broadcasts all WWE specials live, including WrestleMania, SummerSlam, Survivor Series and Royal Rumble.
GOtv viewers have access to the action on Select 3, available to GOtv Plus customers.