List of best schools on Government admission
Next Story

The First Lady Janet Museveni and the Minister of Education and Sports officially welcomed and congratulated the six Ugandan medalists and the entire Ugandan team that participated in the Commonwealth games in Gold Coast, Australia.

They included boxers, swimmers, badminton and netball players among others.

Overall, out of 71 countries that participated in the Commonwealth games, Uganda featured among the 43 medal winning countries, ranking the fourth followed by South Africa that appeared the sixth, Nigeria the 9th,  Kenya the 14th among the African countries and the fifteenth in the world.

Mrs Museveni welcomed Team Uganda home with a lot of pride. "We are here to celebrate what you have done and we salute you for the great performance, you have opened the eyes of Ugandans to think and dream big because of what you have done for us this time round", she said. 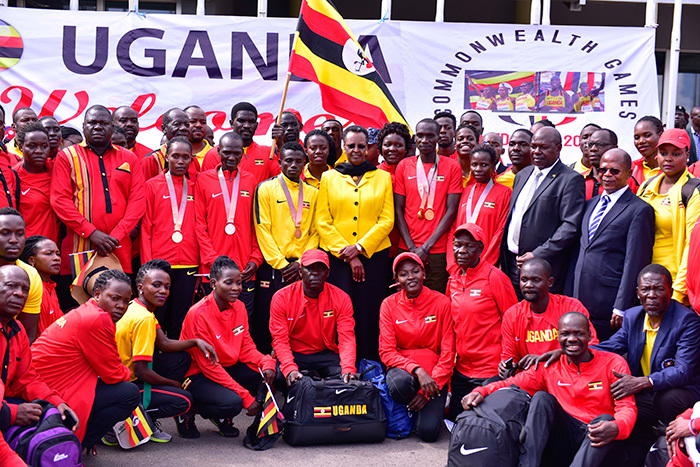 Government provided timely facilitation for the participants this time round. The government supported the 21st Commonwealth games 2018 to the tune of Shillings 3.1 billion

The State Minister for Sports Charles s Bakabulindi reported that Team Uganda exhibited maximum discipline during their stay in Australia.

He added that people in the diaspora have appreciated Uganda's steady progress in development "Ugandans showed their solidarity and the team was highly boosted, he said.

Uganda's 'Golden Boy' and hero, Joshua Cheptegei said he was overwhelmed by the athletes' performance. "Indeed we are Hero's. Uganda will win more medals", he optimistically said.

"Our team participated in eleven disciplines successfully and implemented the President's instructions during his briefing with words of encouragement at State House Entebbe on departure", he said.

Friends of Libya? I doubt