MENU
Over 3,000 people tested for HIV and TB in Tororo
Previous Story

Aid conference for DR Congo sets sights on...
Next Story

Child care: Do orphans have an alternative?

Joy Tumwesigye, a family counsellor, says relationships between adults and children in the orphanage are usually superficial and brief, with little warmth and affection.

Joy Tumwesigye, a family counsellor, says relationships between adults and children in the orphanage are usually superficial and brief, with little warmth and affection.

"Kenny! Kenny!" a deep angry voice bellowed. It was the orphanage's warden. Startled from his sleep and drowsy, Kenneth Sserunjogi, 12 then, hurriedly sat up from his thin coarse mattress. Sserunjogi received several slaps as the warden demanded to know why the floor was wet and he had done nothing about it.

He had only been at the orphanage less than five months, after his peasant mother, the family's sole provider who was struggling to make ends meet, let him join the orphanage. Sserunjogi had eight siblings and he was the first-born. Often he went to bed hungry. The family lived in a dilapidated house with a leaking roof in Mengo, Kampala.

The troubled child always found solace at the football pitch in the neighborhood.

"Whenever I was playing football, it felt like all my troubles were no more. But returning home brought them all back," he says in a low tone.

One day, while playing football, a man approached Sserunjogi. He said he liked the way he played and wanted him to join his football team. The two became acquainted and the man learnt of Sserunjogi's impoverished background.

The man said he run an orphanage and would take good care of him.

Sserunjogi run home to his mother and broke the news. His mother, with a heavy heart, let him go. Indeed, when he got to the orphanage life was great. The meals were regular and he always ate to his fill. What's more, there were many boys who also loved and played football. So after school in the evenings, it was bliss at the football pitch.

The orphanage which was located in Rubaga had 32 children, who were housed in a house, a few metres from another house where the administrator lived with his family.

But he missed his mother. So he alternated his nights between home and the orphanage, but eventually settled for the orphanage.

About three months down the road, the rosiness disappeared, as the meals became irregular and he barely received the school requirements such as books.

Memories of his home started flooding his mind, because despite his mother failing to provide the basic needs, she loved him and he always shared all his fears amidst encouragement from her.

"In the orphanage no one could listen to you. You lived with your problems for months until they just become part of your life," he recalls.

What's more, he and the other orphans suffered violence from the warden. He narrates that once, the orphans witnessed the warden beat up their counterpart, who had been found guilty of stealing a shoe. The warden was so violent that they thought the boy would die.

After several punches and kicks, the boy was commanded to leave and never return to the orphanage.

"The boy left and for an entire week we looked for him. We then found him sleeping in a trench begged him to return home, but he said he could not come to a place where he was going to die. I have not met him up to today," Sserunjogi narrates.

Meanwhile, the situation at the orphanage was worsening; the children barely ate and lacked school supplies. Unknown to the orphans, the administrators of the orphanage would receive donations, both cash and material and share them amongst their families, leaving the orphans in dire need.

However, when they were discovered, the orphanage was disbanded. It is during the closure of the orphanage that one of the donors revealed to the orphans that the administrator had been diverting the donations.

"The people who closed the orphanage tried to reunite all of us with our relatives. When I went home, my family was not there anymore. I was stranded," he narrates. For a while, he sought refuge at a school until he was taken to a family, which had a mother, father and their two biological children.

"I was welcomed in the home. And when I was invited to the dining table to share a meal with the family, the father introduced me to his children and wife and said I was their new brother, and that they should share everything with me," he says.

That was the turning point in Sserunjogi's life.

"Unlike in the orphanage where no one cared, I found a father in this man. He took care of me, listened to me and always gave me advice. I performed well throughout my education to the university. I recently graduated with a bachelor's degree in information technology."

Sserunjogi, 21 now, works with Abato Foundation Uganda in Mpigi district, a non-governmental organisation that works for orphans and other vulnerable children. He also works with Onside Soccer Uganda, a project that uses sports as a tool of reaching out to youth and children in different locations to spread the gospel as well as life skills.

He says if it was not for the home care orphanage based system, he would be living like a destitute today.

Eleven percent of the children younger than 18 years are orphaned i.e. they have lost one or both parents. These figures implied that at that time there were approximately 2.4 million orphaned children in Uganda. The findings further show that orphanhood in Uganda has been slightly on the decrease across the three survey periods, from 15% in 2005/06 to 11% in 2016/17.

According to the ministry of gender, labour and social development, out of the more than 1,000 orphanage homes in the country, only 83 are registered with the ministry.

The history of orphanages in Uganda
After the liberation war in 1986, many people lost their lives and there was an upsurge of orphans. In equal measure, there was birth of many NGOs taking care children. Most of them opted for creation of orphanages and since then, it has been the biggest child care model.

However, much as the orphanages provided good food, education, shelter and most of the basic needs of children, some of the children who grew up in them have terrible memories.

Mark Riley, one of the founders of Alternative Care Initiatives, an NGO established to respond to the growing need in Uganda to support the Government of Uganda and others to implement alternative care solutions, i.e. family-based placements for children outside of parental care says: "Children need to grow up in communities and families and not in institutions. There is no such thing as a good orphanage or children's village. All are detrimental to child development."

Joy Tumwesigye, a family counsellor working with Uganda Prisons explains that research has documented the effects of raising children in orphanages.

"The younger they are, the more profound the effects," she says.

The counsellor continues that unlike in a family where the parents or adoptive parents will have genuine interest in the child's development and go the extra mile of getting the best out of them, caregivers in orphanages may not have similar zeal.

"Relationships between adults and children in the orphanage are usually superficial and brief, with little warmth and affection," says Tumwesigye.

Take an example; children who are quiet, moody or sickly are usually ignored by staff. Yet, if a child is outgoing, the child receives more attention and responds even more positively.

Sadly, children with physical handicaps may receive less attention if they are placed with children who have no handicaps.

"Orphanage life does not provide children with the quality of life, or the experiences they need to be healthy, content, fully functioning adults. In orphanages, the child's needs are secondary to the requirements of the group routine," the counselor emphasises. 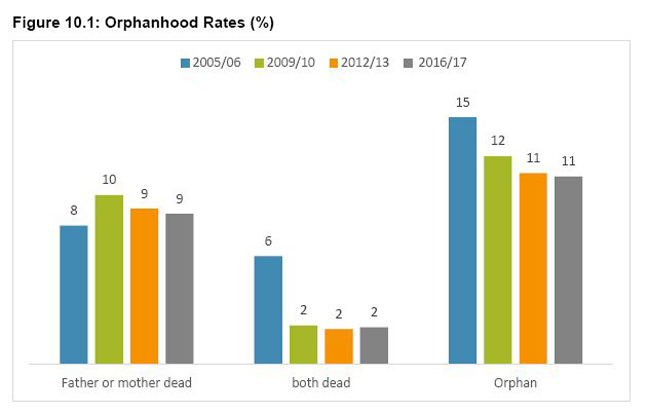 The Ugandan Government believes that it is best for all children to grow up in families. Assistant commissioner for children James Kaboggoza explains why.

"We believe that the best place for a child to grow up is in a family, in a community setting. Many children are growing up separated from their families or orphaned, living in child care institutions."

"We encourage Ugandan citizens to open their hearts and homes to children who have no families of their own and make a place for them within their own family," he advises.

Are our foot soldiers equipped for this COVID-19 war?