Two lady pairs stormed the quarter-finals of the Singleton Golf Challenge after overcoming a tough men's opposition, as the fight for an all-expenses paid trip to Dubai for the DP World Tour Championship intensified.

They will now continue fancying their chances against Eillis Katwebaze/Collins Mwesigwa who they take on in the quarter-finals next month. Katwebaze/Mwesigwa was 1UP victors over Paul Nsereko and Enock Nuwagaba.

"There are free tickets to Dubai and we are working towards that, but it wasn't easy. Bogera was a tough opponent," Nakalembe said after their round.

Peace Kabasweka and Sheila Kesiime is the other ladies pair still standing having beaten Joseph Galiwango/Ali Juuko, 3&2 in the four-ball-better-ball match play series.

Wendy Angudeyo/Doreen Mwesigye found the round of 16 tough falling to Charles Mubiru and Joseph Mawejje, 4&3. Mubiru and Mawejje will now prepare to take on Vincent Asiimwe and Francis Otim who saw off Morgan Otile and Herbert Opolot, 1UP on Saturday. 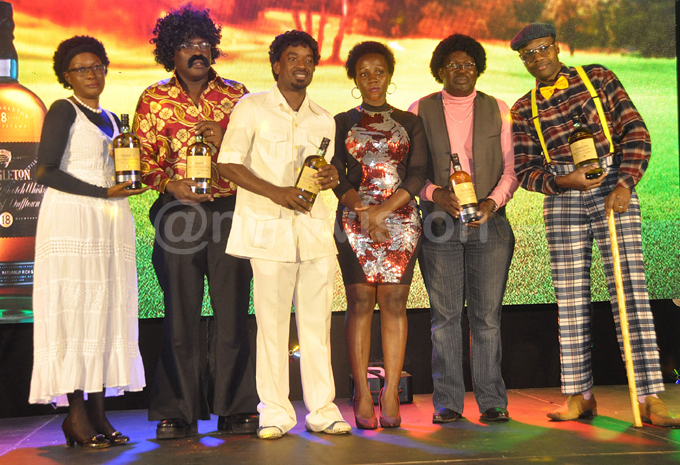 Head of Whisky Portfolio UBL Nakiyaga (center) poses with golfers as per the night's theme of 'the oldies' after the the Singleton Golf Challenge round of 16 at Entebbe Club. PHOTO: Michael Nsubuga

The professionals who joined the fray at this stage had another lady golfer Flavia Namakula eliminating Henry Lujja 4&3 while Deo Akope beat Brian Mwesigwa 3&1, in the sh15m battle.

In the subsidiary event Becca Mwanja, Stanley Muhwezi and Perry Musiime were the top players in the men's Groups A-C while Resty Nalutaaya and Pamela Tumusiime came top in the ladies Groups A&B; winning themselves prizes ranging from Explora decoders, 3 months subscriptions on DStv, rounds of golf and a weekend for two at the Lake Victoria Serena Resort.

At the 19th hole, on first sight you would mistake the golfers for clowns but they were only dressed up as per the day's theme of the back to 90's.