The fruit that cures syphilis

The Kigelia tree with its fruits. Photos by Umar Nsubuga

The sausage tree (Kigelia) is a genus of flowering plants in the family Bignoniaceae. The genus comprises of only one species, Kigelia Africana, which occurs throughout tropical Africa.

The tree is widely grown for its decorative flowers and unusual fruit.

Planting sites should be selected carefully, as the falling fruit can cause serious injury to people and damage vehicles parked under the trees.

Dr. Twaha Kakooza, an herbalist based at Kayunga says the genus name comes from the Mozambican Bantu name, Kigelikeia, which the common name sausage tree refers to the long, Sausage-like fruit.

Kakooza also says the sausage tree grows up to 20m tall; the bark is grey and smooth at first, peeling on older trees. The wood is pale brown or yellowish and prone to cracking.

The tree is ever green where rainfall occurs throughout the year, but deciduous where there is a long dry season.

The flower and later the fruit hang down from branches on long flexible stems of two to six metres. 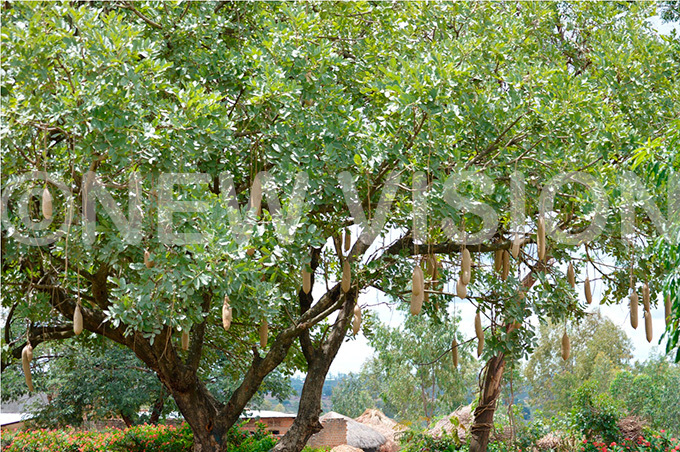 Flowers are produced in panicles and bell-shaped similar to those of the African Tulip tree, but darker, orange to reddish or purplish green, and waxier about 10cm wide. Individual flowers do not hang down, but are oriented horizontally.

Some birds are attracted to these flowers and the strong stems of each flower make ideal footholds.

Their scent is most notable at night indicating their reliance on pollination by bats, which visit them for pollen and nectar.

The fruit is a woody berry that weighs between five to 10kg and hangs down on long, rope-like peduncles.

Its smell is not very good for the human nose and it attracts bats, baboons, birds and bush pigs in big numbers.

It is eaten by several species of mammals, including elephants, giraffes, monkeys and hippopotami.