ZIMBABWE - "The president is in charge and that means me too," says Zimbabwe's "former first lady Grace Mugabe" to howls of laughter from the theatre audience.

"Everyone must rally behind me, the mother of the nation. I am the wife of the president."

"Grace" was on the stage of Harare's Theatre in the Park, brought to life by actress Carol Magenga in a recent three-day run of a production called "Operation Restore Regasi".

The play, which chronicles the final days of former president Robert Mugabe's rule, marked a watershed in Zimbabwe, where satirical productions that mocked Mugabe used to be ruthlessly suppressed.

It has been a resounding hit with audiences starved for decades of incisive and topical humour - and so far, there has been no official backlash.

Trevor Chisvo, a 26-year-old teacher, called the dialogue, a mix of English and Shona, "hilarious".

"It is funny that we're enjoying events in our country that could have turned violent," he said. "The guys did very well."

The play was sold out and extended its run for three further performances.

The production and its reception are a far cry from the recent past when artists were intimidated by security forces if their work was deemed to insult Mugabe or his government.

In the early 1990s, playwright Denford Magora was forced into hiding after state security agents went to his home to confront him about his work, "Dr. Government".

The script portrayed the government as an incompetent doctor asked to make way for a better-trained nurse in the effort to resuscitate a critically-ill patient called Zimbabwe.

Another production which portrayed Mugabe surrounded by sycophantic "yes men" was banned.

But the tide turned against Mugabe dramatically in November last year when the army took control of key sites across Harare including the state broadcaster and parliament.

Zimbabwe's top military commander Constantino Chiwenga denied staging a coup d'etat, insisting they were conducting an operation against "criminals" around Mugabe which was widely accepted to mean his wife Grace and her supporters.

Mugabe finally resigned when his own ZANU-PF party began impeachment proceedings against him and tens of thousands of ordinary Zimbabweans took to the streets. 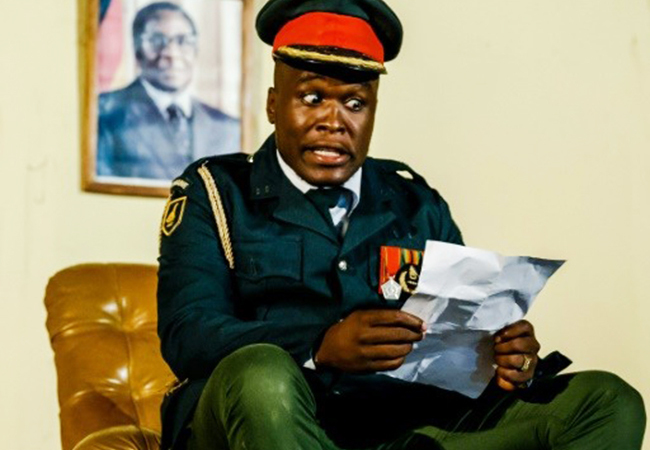 'We are finished, Grace'

"Operation Restore Regasi", set at Mugabe's opulent Blue Roof private residence in Harare, depicts the mounting tensions between Grace and the military in the run-up to the momentous events of November.

"Bring your guns and your soldiers to shoot me," says a cackling Grace in one scene.

"Even if we give some of you guns, you will not dare shoot but you will shoot yourselves," she adds, capturing the shrill egoism that defined Grace's reputation as first lady.

The plot follows the real-life drama when the military puts Mugabe and Grace under house arrest prompting her to demand that the president intervenes.

"I can't do anything - even the police have been arrested," a suddenly helpless President Mugabe, played by Khetani Banda, responds meekly.

Throughout the play Mugabe, who is now aged 94, is often shown asleep, only stirring to parrot party slogans.

"Who fired Mnangagwa?" Mugabe wonders aloud in one scene, forgetting that it was he who sacked his deputy Emmerson Mnangagwa, who later succeeds him as president.

"We are finished, Grace," says a broken Mugabe to his wife, prompting her to accuse him of failing to protect their family. Mugabe retorts that the situation is down to her provocative actions.

Director Charles Munganasa, who also played the part of Chiwenga, said that he sought to achieve a form of documentary storytelling with the play.
'A parasite to progress'

"The Robert Mugabe story is going to be told for generations and generations to come. It's a form of documentary theatre," he told AFP following a packed performance.

"I was very terrified and I was wondering what is going to be the future of Zimbabwe and the people.

"Every Zimbabwean was happy when Mugabe decided to resign. He was not just a parasite to the people of Zimbabwe - but also a parasite to progress and to the world." 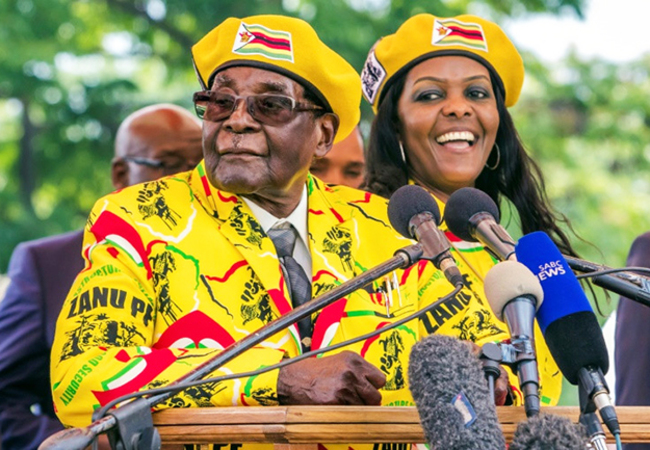 In their pomp: The Mugabes, seen among supporters last November after Grace Mugabe engineered the dismissal of Emmerson Mnangagwa as vice president

Prominent playwright and actor Daves Guzha, who runs Theatre in the Park, said that the response of the authorities to the play "bodes well for the future of Zimbabwe".

Even the play's title is a pun, as Chiwenga struggles to pronounce "Ls" - and so "Legacy" became "Regasi" (pronounced "Regasy") in the "Operation Restore Legacy" that triggered Mugabe's fall.

The new production coincides with hopes of freer expression after Mugabe's downfall, and with the advent of elections due in July.

But whether artists will regain full liberty over time remains unclear.

"Maybe there is now more freedom of expression that is beginning to build up and we need to keep the momentum," suggested Guzha.

"We need to keep on pushing the boundaries before these guys in power start actually saying 'it's enough'."