Home
NEWS
Media
Supplements
Tenders
Notices
Rogers Muhindo, a Primary Two teacher, said the since the school located in a mountainous area, most pupils have never seen a vehicle, yet they teach about vehicles.

Rogers Muhindo, a Primary Two teacher, said the since the school located in a mountainous area, most pupils have never seen a vehicle, yet they teach about vehicles.

PIC: Teacher Muhindo showing pupils of Primary two the cars, which had come to the school. (Geofrey Nyamwongera)

BUNDIBUGYO - While part of the country is experiencing heavy traffic jam, in another part, it is a miracle to have a glimpse on a vehicle.

This was the case in Bundibugyo, where a teacher had to stop a lesson halfway to ensure that pupils see what they had always been been taught.

Rogers Muhindo of Karambi Primary School in Burondo sub-county Bundibugyo district, adjourned a lesson to let the pupils enjoy the view of what was regarded a 'fleet'.

The Primary Two teacher, said since the school is located in a mountainous area, vehicles barely pass there for pupils to see, yet the are taught about vehicles. 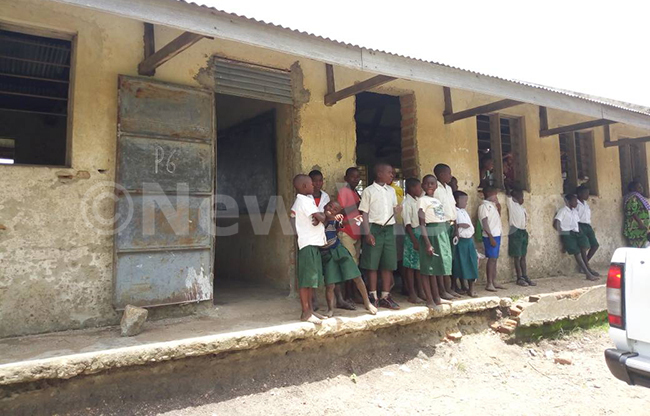 Pupils of P6 also took to the opportunity to view cars. (Geoffrey Nyamwogera)

Muhindo said in a single year, one vehicle goes past the school, but since five cars had come at once at the school, it was a chance to pertake of.

The vehicles belong to the district officials who had gone to monitor and commision classrooms constructed by World Vision, a non-governmental organisation.

The good news, however, is that the road leading to the school was graded in February to allow movement of the dignitaries for the commissioning of the classrooms.

Hopefully, more vehicles will reach the school more often than before.