Students, teachers rush back to class in I...
Next Story

Baghdad's skyline is dotted with the desolate sights of rusting cranes, while roads and bridges are gutted with potholes and craters from lack of maintenance

Baghdad's skyline is dotted with the desolate sights of rusting cranes, while roads and bridges are gutted with potholes and craters from lack of maintenance

PIC: Baghdad's iconic Fardous (paradise) Square, where a giant statue of Saddam Hussein was pulled down, remains in need of restoration. (Credit: AFP)

IRAQ - After the US-led invasion of Iraq in 2003 there were hopes its millennium-old capital Baghdad could rise again from the ashes, but construction sites have remained idle as if time stood still.

For 15 years promises of rebuilding infrastructure in the second most populous Arab capital have fallen through and a multitude of projects have been shelved.

Baghdad's skyline is dotted with the desolate sights of rusting cranes, while roads and bridges are gutted with potholes and craters from lack of maintenance.

Even the emblematic Fardous (paradise) Square, where a giant effigy of dictator Saddam Hussein was symbolically pulled down with the help of US Marines, remains to be revamped.

Infrastructure across Baghdad, a city of 900 square kilometres (350 square miles), is in dire need of repairs.

"Industry, education, health, agriculture... everything is now worse than it was during Saddam's rule," said businessman Sadeq al-Shomari.

In 2004 and again in 2007, international conferences were organised to rebuild Iraq and donors pledged massive funds for projects that have never materialised.

Some of the funds allocated to rebuilding Baghdad have disappeared, according to Transparency International which ranks Iraq as the 12th most corrupt country in the world. 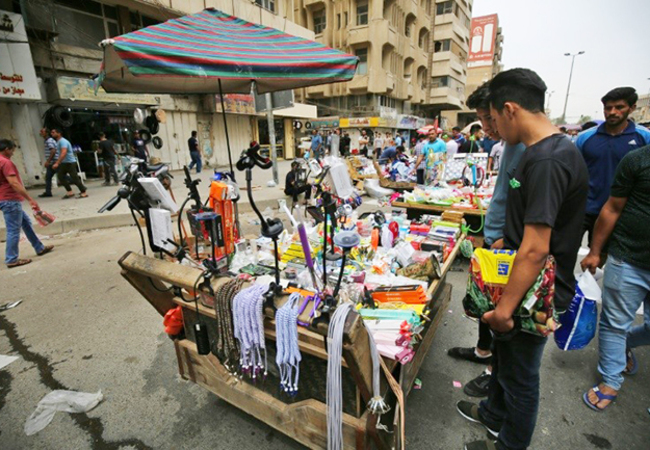 Iraqi street vendors display their products in Baghdad, where the population have swelled from 4.7 million in 2003 to 7.2 million inhabitants in 2018

Teacher Zuheir Ouasmi blames it on corrupt officials who he says have pilfered Iraqi coffers, comparing his country's woes to the folk tale "Ali Baba and the Forty Thieves".

Before 2003 "the wealth of Ali Baba was in the hands of the dictator but now 40,000 thieves have take over Ali Baba's cave and the treasure", he said.

As Baghdad's infrastructure worsens, its population has swelled mainly due to an influx of people who fled conflict zones elsewhere in Iraq to settle in the capital.

In 2003, the capital was home to 4.7 million but now the population of Baghdad is 7.2 million strong.

During that same period the number of cars in the congested city also grew from 250,000 to more than two million vehicles.

Daily power cuts plague the population who, in order to keep their refrigerators working and mobile phones charged, must rely on privately-owned generators.

The streets of the capital- wracked by years of sectarian violence after the US-led invasion that ousted Saddam and car bomb attacks - are some of the most congested in the world.

Cement blocks have been erected to block off roads and render them more secure from 2003 onwards, and restaurants, cafes and shops have also used cement walls and sandbags as protection.

Now that the violence has decreased, hundreds of streets have been reopened but roadblocks manned by security forces are still an obstacle course for motorists and pedestrians alike.

The iconic Rashid Street, which was built during World War I and until the 1970s was Baghdad's answer to the Champs-Elysees in Paris, is now dotted with "cement walls and roadblocks and rubble",  bemoaned US-Iraqi architect Raya Alanie.

"It is sad. Everything must be renovated," she said of Baghdad's heritage. 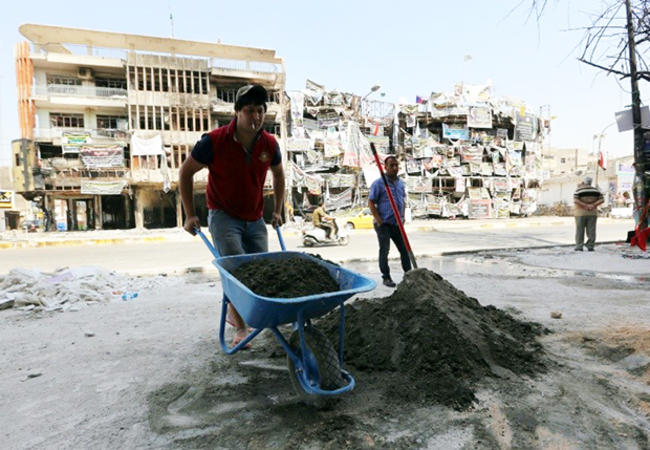 Workers rebuild on July 31, 2016 a shop that was damaged in a bombing in Baghdad's Karrada Dakhil street in the capital's commercial Karrada district

City within a city

Alanie recalled the heyday of the city, heart of the Abassid Caliphate and the centre of Arab and Muslim civilisation for five centuries.

Baghdad "was the first city to equip homes" along Abu Nawas Avenue which girds the Tigris River, "with solar energy" in the 1980s, when Saddam ruled over the country, she said.

The Tigris is the city's green lung and on the other bank, behind barbed wire and cement fortifications, a small island can be seen.

There, in what is known as Baghdad's Green Zone, the grass is green and traffic along its wide avenues is rare.

The fortified area houses the country's key institutions and it is where the US troops that invaded Baghdad in 2003 had set up their headquarters in Saddam's palace.

The Green Zone is out of bounds for most Iraqis and only a few are privileged enough to have a pass to enter the area, which is also home to the US and British embassies.