Hundreds of local Kenyans were employed to play militia recruits

Hundreds of local Kenyans were employed to play militia recruits

PIC: Soldiers practise their skills in Kenya before going to fight for real. (Credit: AFP)

This is where - and how - British soldiers learn to fight, in regular six-week training sessions culminating in a simulated assault, this time involving 1,000 troops.

"This is among the most demanding training that we do," said Brigadier Nick Perry, commander of Britain's 16 Air Assault Brigade, who was in Kenya with three companies of Gurkhas, a storied regiment made up predominately of Nepalese recruits, with their signature curved kukri knives.

The size and scale of the British war games in Kenya is unusual: only Suffield in Canada and England's Salisbury Plain allow something similar.

In recent years, infantry units were sent to Kenya for their final training before being deployed to Afghanistan and, for the "rapid reaction force" 16 Air Assault, being always battle-ready is a point of pride.

"I need soldiers to be ready to go on operations at very short notice," said Perry.

"Kenya allows large-scale exercises so the whole battle group - the infantry, the artillery, the engineers, the intelligence and surveillance assets - can be tested alongside each other."

They also work alongside the Kenya Defence Forces (KDF), of which a 150-strong company swept across a hillside dotted with acacia and euphorbia trees in one of the final moments of the recent training exercise.

"Increasingly, operations around the world are multinational. It is pretty rare now to find a single nation at conflict, and as Britain we are not in that game."

Britain has not gone to war alone since 1982 when it fought a two-month battle with Argentina over the Falkland Islands. British troops are currently deployed as part of multinational forces in Afghanistan and Iraq and as peacekeepers in South Sudan and Somalia. 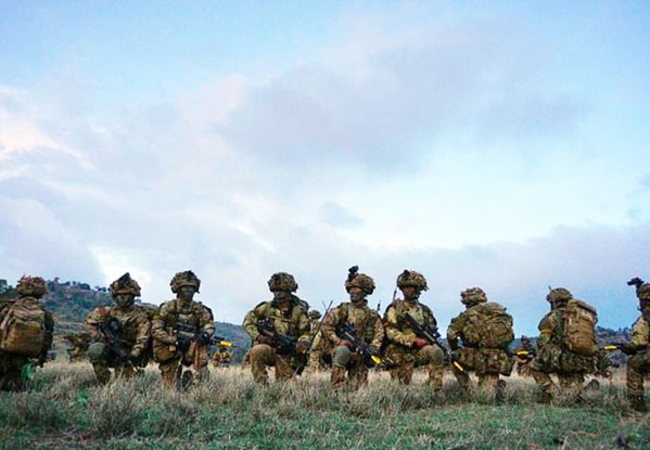 A history of (simulated) violence

Battle groups come to Kenya several times a year, training with live fire at Archer's Post in the centre of the country and on private land in Laikipia.

But it also underpins Britain's diplomatic relations with Kenya, a former colonial property where a bitter independence war was fought in the 1950s, yet where British military training has continued with few breaks for over 70 years.

"We are very much part of life here," Wood said.

The aim of the training is not to inflate soldiers' confidence with easy wins, but to push them, sometimes to the point of defeat.

"It is a challenging war-fighting mission against an impressive and well-equipped enemy," said Perry, of the assault exercise.

It began in a clearing of croton and poison arrow trees where two six by six-metre (20 x 20-foot) tarpaulins were laid on the ground and marked with map grid references, contour lines, rivers, tracks and buildings.

"Expect the enemy to fight, withdraw and counterattack, so what does that mean? You have got to push them hard at the break-in, you've got to cut them off," Gurkha commander Lieutenant Colonel Charlie Crowe told his soldiers after working through the attack plan, hour by hour, company by company.

Complicating the exercise, the soldiers first had to build bridges across a river as they entered hostile territory, including one 14 metres (46 feet) long made to carry vehicles.

"It is a very physical task that requires a... fair degree of 'motivation'," one of the BATUK trainers explained as the engineers swore, creatively and consistently, in the dark, night-vision monoculars helping them see and connect the hulking girders. Soldiers in a truck prepare for an overnight simulated military excercise

Sunrise was met with a mechanised dawn chorus of machine-gun and rifle fire echoing across a natural cauldron among the folding granite Lolldaiga Hills. Mortar explosions thumped in the valley.

The rounds were blanks, but infrared pointers on the gun barrels, and receivers on the soldiers' vests and helmets, told who was hit and who killed.

Nine miles (15 kilometres) away, in a cluster of three olive drab tents bristling with radio antennae, officers and trainers watched a real-time version of events on computer screens, multicoloured markers moving across a three-dimensional terrain.

A company of 80 soldiers from the Duke of Lancaster's Regiment played the enemy, defending a training camp made up of a dozen wooden huts surrounded by razor wire and mud berms.

Hundreds of local Kenyans were employed to play militia recruits and the civilian inhabitants of a nearby village, also specially constructed for the exercise.

Mostly they watched, amused, as persistent gunfire crackled and British squaddies charged about, sweating heavily under the weight of backpacks, rifles and ammunition as the sun rose and the temperature soared.

"I am brown bread! That's me done," shouted one of the Lancaster gunners, as his vest confirmed a fatal hit. His use of British rhyming slang for "dead" baffled the nearby Kenyans.

The assault was slow, hampered by a hard march and casualties, but ultimately effective. "We were tested to, and sometimes beyond, the point of failure," said Crowe afterwards.

'Where is my name?' Afghan women seek right to identity

US fashion world asks: where are all the black designers?