South Africa paid tribute to Winnie Mandela's "fighting spirit" on Tuesday as plans were made to mark the life of the firebrand anti-apartheid campaigner and Nelson Mandela's former wife.

Mourners continued to gather at her Soweto home to honour the anti-apartheid fighter after President Cyril Ramaphosa confirmed that a memorial service would be held on Wednesday April 11 and a full state funeral on Saturday April 14.

The outspoken leader of the opposition Economic Freedom Fighters (EFF) party Julius Malema, who became a confidante of Winnie Mandela in recent years, is expected to visit her modest two-storey red brick home on Tuesday.

"She affirmed both the love and anger of black people; always committed to their right to defend their lives even (with) arms in the face of a deadly apartheid evil," the radical leftist party said in a statement.

The ruling African National Congress (ANC) party's Women's League, which Winnie Mandela once led, will stage a mass march to her home on Wednesday.

'Brutality of the apartheid state'

The firebrand activist died in Johannesburg's Milpark hospital, her family said, adding that she had "fought valiantly against the Apartheid state" and that she was known "far and wide as the Mother of the Nation".

Residents and friends gather outside the home of the late Winnie Mandela, the estranged wife of the first black South African president on April 2, 2018, in Orlando, Soweto.AFP Photo / Mujahid Safodien

Winnie Mandela, who was married to Nelson Mandela for 38 years, played a high-profile role in the struggle to end white-minority rule, but her place in history was stained by controversy and accusations of violence.

"She died after a long illness, for which she had been in and out of hospital since the start of the year. She succumbed peacefully in the early hours of Monday afternoon surrounded by her family and loved ones," said her family in a statement.

After her death was announced, Ramaphosa described her as "a voice of defiance and resistance" who "was an abiding symbol of the desire of our people to be free".

"For many years, she bore the brunt of senseless brutality of the apartheid state with stoicism," he said.

"Despite the hardship she faced, she never doubted that the struggle for freedom and democracy would triumph and succeed."

Winnie Mandela often criticised the ANC, but she had expressed support for the current leadership of the party, which her husband led to power in the euphoric post-apartheid elections of 1994.

On Monday evening, Ramaphosa returned to her Soweto house as mourners gathered outside, singing struggle-era songs in tribute and praise.

Most of Winnie's marriage to Nelson was spent apart, with Nelson imprisoned for 27 years, leaving her to raise their two daughters alone and to keep alive his political dream under the repressive white-minority regime.

But her reputation came under damaging scrutiny in the twilight years of apartheid rule. 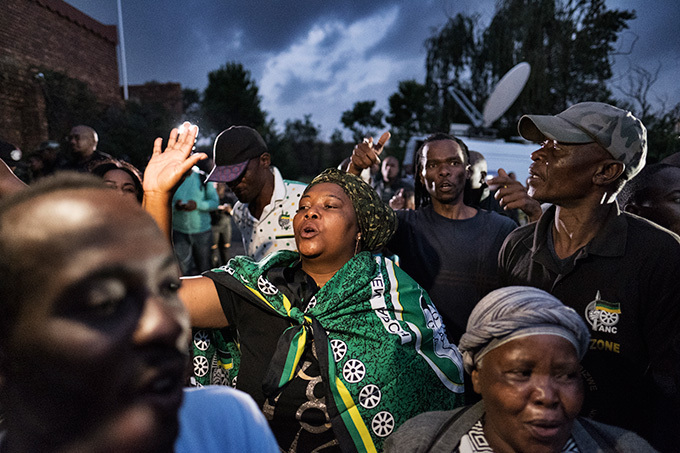 ANC (African National Congress) supporters react outside of the house of the late Winnie Mandela, the estranged wife of South Africa's first black president, on April 2, 2018, in Orlando, Soweto.

In 1986, she was widely linked to "necklacing", the burning alive of suspected traitors who had flaming, petrol-soaked tyres forced over their heads.

In 1990 the world watched when Nelson Mandela finally walked free from prison -- hand-in-hand with Winnie.

The following year, she was convicted of kidnapping and assault over the killing of Stompie Moeketsi, a 14-year-old boy.

In 1992, the Mandelas separated, and then divorced in 1996, after a legal wrangle that revealed she had an affair with a young bodyguard.

During her old age, she re-emerged as a respected elder who was feted as a living reminder of the late Mandela's legacy -- and of the long and celebrated struggle against apartheid.

Notice from the Judiciary