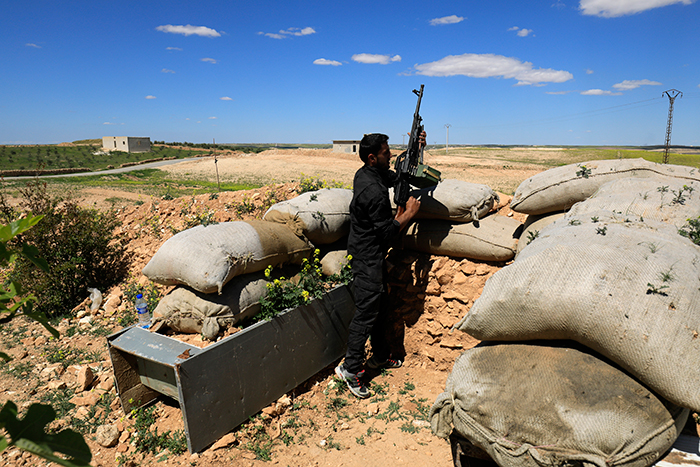 PIC: A fighter from the Manbij Military Council stands guard near the village of Awshariyah, north of Manbij on March 31, 2018. (AFP)

SYRIA - Syria's army Saturday promised to finish off rebels in a final holdout of the crumbling opposition bastion of Eastern Ghouta where talks on a possible evacuation deal have stalled.

The army said it would press "fighting in the area of Douma to rid it of terrorism", referring to rebels in a final pocket comprising the former bastion's main town.

The announcement came shortly after state media said a penultimate pocket of Eastern Ghouta was "empty of terrorism" after tens of thousands were bussed out of it under an evacuation deal.

Thousands more were also evacuated from a first pocket under a similar deal last week, but Russia-backed talks have stalled over a possible evacuation of fighters and civilians from Douma.

Jaish al-Islam, the rebel group that controls Douma, has refused to leave.

With the latest evacuations, Russia-backed regime forces have retaken 95 percent of Eastern Ghouta since launching a blistering assault on February 18, the Syrian Observatory for Human Rights says.

That assault has killed more than 1,600 civilians and seen tens of thousands more flee the fighting into regime-held areas, the Britain-based monitor says.

The evacuation deals have seen fighters and civilians driven to the northwestern province of Idlib, the last in Syria to be largely outside government control.

The regime retaking Eastern Ghouta would be a considerable victory in Syria's seven-year war, which has killed more than 350,000 people and displaced millions.