In a non-violent demonstration that paralyzed Kamuli Town on Tuesday morning, youths, boda-boda cyclists and traditional healers demanded for the resignation of Namuganza

In a non-violent demonstration that paralyzed Kamuli Town on Tuesday morning, youths, boda-boda cyclists and traditional healers demanded for the resignation of Namuganza

Residents of Kamuli have expressed dissatisfaction over the state minister for lands Persis Namuganza conduct, saying she portrays Busoga in bad light and, therefore, should disciplined by the appointing authority.

In a non-violent demonstration that paralysed Kamuli town on Tuesday morning, youth, bodaboda cyclists and traditional healers demanded the resignation of Namuganza.

The procession started from Kamuli town to Budhumbula Palace, where a petition was handed to the palace caretakers.

"We have come a long way. We cannot allow individuals with selfish interests to derail us. We request the President to sack Namuganza," Muwanika said.

Receiving the petition, the royal guard, Robert Lukungu, promised to deliver the petition. 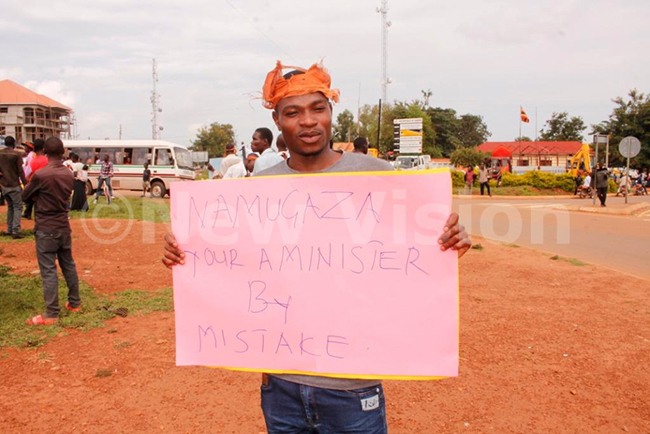 Some of the protestors put their messages in writing. (Credit: Geoffrey Namukoye)

Kamuli district youth councillor Julius Samanya noted that whereas the Kyabazinga has initiated multi-billion projects in the region, they can only come to pass if diversionary acts are nipped in the bud.

Gatrude Aliyinza, the chairperson of Kamuli women's league observed that when Namuganza attained a ministerial post, it fattened her ego.

"It is not the nature of a Musoga woman to sideline cultural ethics, this is betrayal. If she does not apologise to the people of Busoga, let her resign as minister," Aliyinza said.

As MP for Bukono County in Namutumba district, Namuganza's woes started when she allegedly incited her voters to harm the Kyabazinga of Busoga and the Speaker of Parliament, Rebecca Kadaga, both of whom hail from Kamuli district.

During the launch of water projects in her constituency, Namuganza allegedly told off the duo to concentrate on fighting poverty and jiggers in Kamuli instead of interfering with Namutumba affairs.

Subsequently, Namuganza was thrown out of the Busoga parliamentary caucus by 13 of the 32 MPs from Busoga sub-region.

Whereas there are plans to move similar demonstrations in all districts that make up Busoga sub-region, some observers have said, Kadaga is the invisible force behind demonstrations

"I do not support Namuganza's acts, but why did the demonstration start from Kamuli with Kadaga's posters being flown everywhere" wondered Joel Mbago.

Meanwhile, youth made an effigy of Namuganza, which they moved with around the Budhumbula Palace.

Meanwhile, the Parliament in the process of probing into the Namuganza and Kadaga conflict.