Some of the runners who participated in the Entebbe Marathon in action. PHOTOS: Michael Nsubuga

The 30-year-old Bukwo athlete consequently atoned for his third place finish last year, winning himself sh500,000 on the day and a fully paid trip to participate in the even more lucrative Wuhan International Marathon in China next month.

It was Kiptoyek's first marathon win in the charity event whose proceeds will focus on uplifting UPE schools in Entebbe. Over sh80m was raised from the over 6000 runners that participated in this year's race.

"I have been competing in marathons before, but this is my first win. It was tough, but I prepared well in the mountains and I thank God for giving me the energy; I knew this would open doors for me and I know I can perform better from now on and I'm looking forward to the China trip," Kiptoyek said. 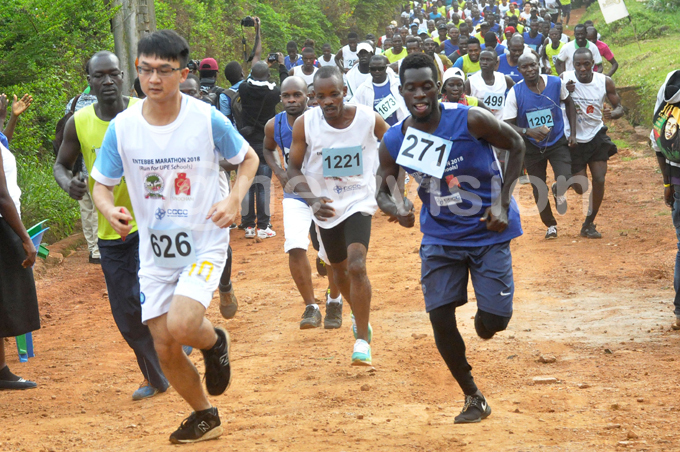 Some of the runners who participated in the Entebbe Marathon

Robert Lubega from Mityana who came second bagged sh250,000 and will join the victor for the China trip while Police's Chemutai Fabia and Mariam Kawuma from Bugiri were the top runners in the women 21km race.

CCCC's PR manager Chris Man said they had contributed over sh60m in partnership with their parent company SINOCHAM as part of their corporate social responsibility.

The minister of state for primary education, Rose Sseninde who also participated in the run, offered sh1m and hailed all the donors and participants for joining hands in improving education in the country.

Entebbe Mayor Vincent Kayanja De Paul said the money collected will go a long way in uplifting the standards of public schools in Entebbe and said the next three editions will focus on the same. A water purifier, fencing, furniture and facelifts are some of the needs that some of the schools had identified.

The chief runner, NCS's Zubair Galiwango who was joined by several alumni of the different benefiting schools and other well wishers in the race, hailed the concept of the run.

The Entebbe marathon is held as part of preparation for the main Wuhan Marathon under a partnership Entebbe Municipality has with the Chinese city.

‘Last year, John Kateregga and Felix Erikana gave a good account of themselves in Wuhan winning the half marathon and finishing sixth in
the China race respectively.

Govt to waive taxes on ARVs