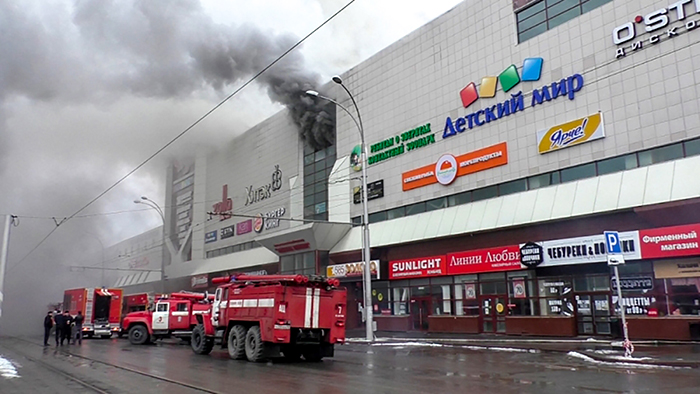 PIC: This handout picture released by The Russian Emergency Situations Ministry on March 25, 2018, shows emergency vehicles as they gather outside a burning shopping centre in Kemerovo. (AFP)

SIBERIA - At least 37 people were killed when a fire ripped through a busy shopping centre in an industrial city in western Siberia, with scores more reported missing, including children.

Images on Russian television showed thick black smoke pouring out of the Winter Cherry shopping centre in the city of Kemerovo, which also houses a sauna, a bowling alley and a multiplex cinema and was packed with people on Sunday afternoon.

"At this time, we can confirm the deaths of 37 people in the fire at the Kemerovo shopping centre", Russia's Investigative Committee said, according to TASS news agency.

Investigators had initially reported five people dead including a child and another 30 people injured and taken to hospital.

As the new death toll was announced, a source in the local rescue services said 69 people including 40 children were reported missing, the RIA Novosti agency reported, while the Investigative Committee said it was "verifying information that 35 people could be missing".

The preliminary findings of the inquiry said the fire started around 1100 GMT in one of the cinema halls and destroyed more than 1,000 square metres of the centre, news agencies reported.

"The roof collapsed in two theatres in the cinema," the Investigative Committee said.

Around 120 people had been evacuated from the burning centre, rescuers said.

"This shopping centre on several floors was packed with people mid-day Sunday. No one knows exactly how many people there were inside when the fire broke out," Alexandre Eremeyev, an official with the local Russian emergency services ministry, said in a statement.

"Where to look for people? How many are there? That has greatly complicated the work of the firefighters," he said, adding that the thick smoke was also hindering their task.

Some 300 firefighters and rescue personnel were rushed to the scene and the fire was brought under control around 1730 GMT, local emergency officials said.

"My condolences to the families and friends of the victims of the terrible fire in the shopping mall in Kemerovo. It is tragic that so many children are dead or missing. I wish a speedy recovery to those injured," he said on Twitter.

It was the deadliest blaze in Russia in recent years.

A shopping mall fire in March 2015 killed 11 people in Kazan, the capital of Tatarstan some 800 kilometres (500 miles) east of Moscow.

In April 2013, a fire ravaged a psychiatric hospital in the Moscow region, killing 38 people, most of them patients who were engulfed by flames as they slept behind barred windows.

Just months later, in September 2013, 37 people were killed when a fire swept through a psychiatric hospital in the village of Luka in northwest Russia.

In 2009, 156 were killed in a nightclub fire in the city of Perm, 1,200 kilometres east of Moscow in one of the deadliest accidents in Russia's modern history.