Will court reign in Kamya and Lukwago?

In January, Kamya suspended the KCCA meetings which Lukwago was chairing, arguing that they were illegal and irrelevant.

In January, Kamya suspended the KCCA meetings which Lukwago was chairing, arguing that they were illegal and irrelevant.

The Lord Mayor argues that by suspending council meetings, Kamya had usurped his executive powers.  But Kamya told New Vision she is ready to face off with Lukwago.

"I am even happy that Lukwago chose to go to court to prevail over this disagreement," she said.

"Let the court decide who is right and who is wrong."

On January 23 this year Kamya suspended the KCCA meetings that Lukwago was chairing, arguing that they were illegal and irrelevant.

The bickering between Lukwago and Kamya at City Hall is as old as the time the two have worked alongside each other in the last two years.

Lukwago sued Kamya alongside the Attorney General. High court judge Justice Henrietta Wolaya, who is handling the case, will on March 27 start the hearing. But this is not the first time Lukwago is running to court over similar issues at City Hall.  In 2012, he dragged KCCA executive director Jennifer Musisi to court for interfering with his duties, but the bickering never stopped.

Lukwago, who declined to comment on the issue when contacted by New Vision, had previously vowed to defeat Kamya in court.

However, former Kampala Mayor Hajji Nasser Ntege Sebaggala has warned him, saying the KCCA Act is clear: that central government took over the power over Kampala from the council in 2011.

"Lukwago is a lawyer and should refer to the KCCA Act which gives the Kampala minister veto powers over the council," Sebaggala said.

"If the council sits and decides to destroy your house, you can petition the minister, who has full powers to reverse the decision."

The former mayor also wondered why the top administrators and division chairpersons who are from the same region cannot put their differences aside and work.

From the onset, when the duo assumed office in mid-2016, Lukwago argued that President Yoweri Museveni had appointed Kamya to fight him. But Kamya denies Lukwago's claims, arguing he has only failed to do his job.

Before Lukwago ran to court, Kamya wrote several letters to KCCA technical staff doubting whether Lukwago was in office to serve or to show off.

In one of the letters, dated January 12 and referenced as 'Evaluation of the performance of KCCA Council and division urban council sittings' addressed to Musisi, Kamya demanded accountability from Lukwago. 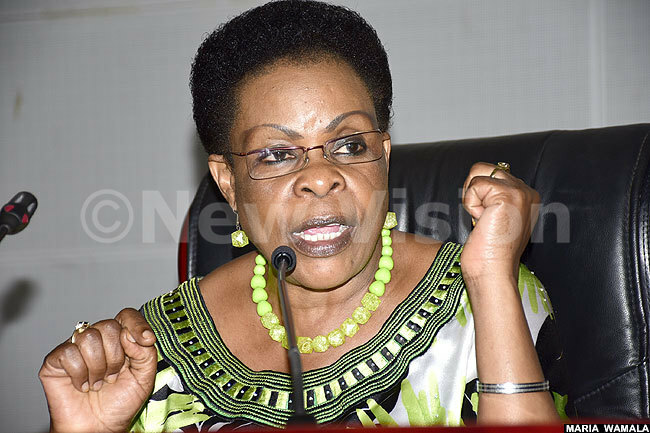 In another letter, dated January 25, Kamya stopped Lukwago from convening what she called "resumed" council meetings, brandishing them as illegal since they are not in the KCCA Act 2010.

Kamya, who has not been attending Lukwago's "council meetings" since January, stated that the law only provides for special and ordinarily sittings.

According to the KCCA Act, Kamya explained that notifications for council meetings are supposed to be issued out 14 days ahead, which Lukwago reportedly does not do.

Sources at City Hall told New Vision that Kamya's performance concerns about Lukwago stem from the fact that two years since he assumed office, his council has only formulated two ordinances.

Lukwago is reportedly operating on old ordinances passed during the John Ssebana Kizito tenure in 2006. 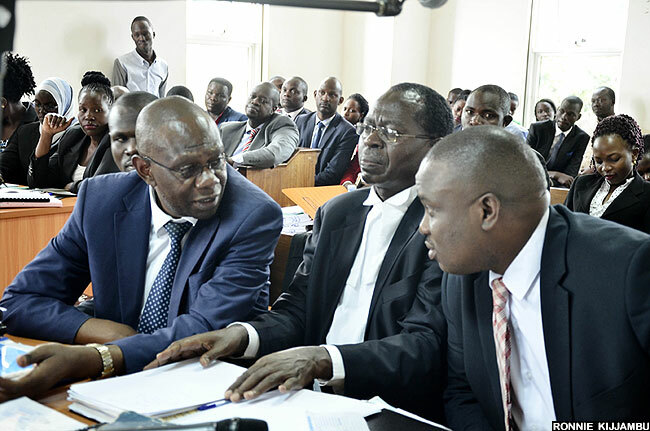 Lukwago's lawyer Ladislaus Rwakafuzi (left) talks to him in court. seated between them is lawyer James Byamukama

According to information from the office of the KCCA clerk, Lukwago has chaired 32 council meetings since assuming office, in which only three council resolutions were passed.

The three resolutions include one on electing his deputy Sarah Kanyike, the second on increasing of the city parking fees implemented last year and the third on reduction of dues in Wandegeya and Usafi markets.

In what seems to be a sign of disapproving Lukwago's performance, Kamya recently blocked the former's  fully-paid trip to the 9th Session of the World Urban Forum (WUF) in Kuala Lumpur, Malaysia that was set to take place from February 7 until February 13.

She wrote: "I shall not be clearing any more applications for travel abroad until the benchmarking trips to Nairobi, Kigali and Dar-es-Salaam on street vendors, boda boda and solid waste management is implemented."

But KCCA director of public and corporate affairs, Peter Kaujju, said there was a directive from the Prime Minister's Office last year in which all line ministers were given the authority to approve travels of all his workers.

Kaujju confirmed that Lukwago was meant to travel for the 9th WUF, the biggest global conference on cities, which took place in Kuala Lumpur.

He said the ticket was paid for by the World Bank and Lukwago was only meant to get per diem from KCCA.