KAMPALA - KCCA FC on Saturday become the first Ugandan club to reach the CAF Champions League group stage following a 1-0 aggregate win over Ethiopian side St. George SC in the first round.

The only goal across the two legs - in Addis Ababa and Kampala - was scored by Muhammad Shaban.

The KCCA attacker headed in from a briefly-taken corner kick, barely into the second half in the return leg to send the home crowd at the compact StarTimes Stadium into wild celebrations.

KCCA, knowing that any score draw would take St. George through, pressed for a second immediately after for a cushion. Paul Mucureezi nearly made it two, as did goalscorer Shaban.

The visitors had their moments of brilliance in front of the Charles Lukwago-manned goal, but KCCA held on for a historic win.

A whooping sh1.9b in the bag

For Uganda's 12-time league champions, progression to the group stage of the continent's most lucrative club footballing action has been a case of firing blanks.

Coach Mike Mutebi's side were on the verge of making it last season against the then-defending champions Mamelodi Sundowns of South Africa. But a heartbreaking equaliser by Liberian Anthony Laffor within the last ten minutes of the return leg at Lugogo came in their way.

Fast-forward to Saturday and the Ugandan representatives were in no mood of having a repeat of that unfold in front of a vociferous home crowd.

Any draw with a goal would send the Ethipions through. And although Carlos Manuel Vaz Pinto's side had moments of huffing and puffing either side of the interval, KCCA ultimately had the edge.

Progression to the next stage means KCCA will bag at least sh1.9b for reaching there. The figure could rise, depending on how the Ugandan side performs thereafter.

For St. George, who have managed six successive appearances in the competition, continental focus will now shift to the less lucrative CAF Confederations Cup, where they have been relegated to. 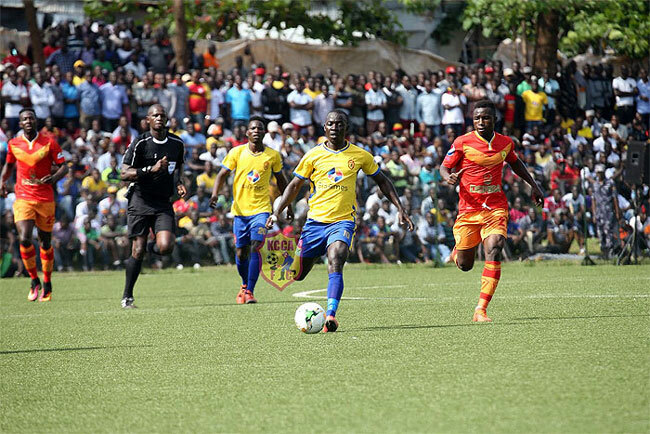 KCCA dangerman Shaban will relish taking up a place in Uganda's history books, thanks to his fierce header that proved decisive in a tight contest.

St. George came to Kampala laden with more continental football experience, which had been in part due to the safe gloves of their fine Ugandan goalkeeper Robert Odongkara.

But the goalstopper, on his return home, was hapless two minutes after restart when Shaban rose highest to nod home from a niftly-taken short corner kick.

Ondongkara had been drawn into plenty of action in the opening half, and had looked determined to help his side advance, as they had done last year. But conceding a goal so early into the second half might have sent unwanted chills in the visiting camp.

It could have gone worse for the Ethiopian giant as KCCA piled even more pressure in the pursuit of another goal.

Mutebi might have told his players to stick to their kind of game: pressing. The KCCA tactician loves it that way.

And he will have been pleased to see the likes of Derrick Nsibambi, Shaban, Mucureezi and Allan Okello playing positive football.

The hosts were the recipient of the first corner of the evening - in the 12th minute. Mustafa Kizza's delivery was, however, easy pickings for Ondongkara, who would again be tested by Muzamir Mutyaba.

On the half-hour mark, Mulualem Mesfin was the player to go in Kenyan referee Andrew Juma Otieno's book for fouling Okello. Nsibambi levelled the yellow card registry when he was guilty of kicking out at an opponent on the other end of the pitch.

But in a turn of moods, the half-time whistle could not have come any sooner for the home fans. After Allan Okello's side netting in added time, the visitors unleashed a counterattack that had Lukwago beaten, only to be saved by profligacy on the part of the opposing attackers.

KCCA returned with a blistering start, pressing forward and scoring from a corner two minutes after restart.

From then on, it was the hosts in control. Shaban should have bagged a brace, but incisiveness in front goal had abandoned him. He often linked up well with Okello, Nsibambi and Mucureezi.

As the game worn on, Mutebi brought on Julius Poloto for Okello, among the changes of the day. And once it was time for Shaban to be substituted late on, the home fans warmly applauded him off the pitch, much to his pleasure.

His goal had made the difference.

It is celebrations in Kampala and disappoinment in Addis Ababa.

Ahead of the competition's group stage action, KCCA will now shift focus to the league, and try to wrestle back the top spot from a determined SC Villa, who are keen on returning to trophy-winning ways.

Addictive gaming to be recognised as disease: WHO