MENU
Down but not out: LRA haunts Central Africa
Previous Story

EU hopes for clarity from crunch US trade ...
Next Story

Freedom on a leash: Dogs give new life to disabled owners

Some of the dogs can recognise the sound of an alarm clock, a knock on the door or a fire alarm

Some of the dogs can recognise the sound of an alarm clock, a knock on the door or a fire alarm

PIC: Dogs at Crufts are given meticulous haircuts before shows. (Credit: AFP)

UK - Alongside well-groomed canines taking part in beauty contests this week at Britain's Crufts dog show, specially trained labradors, poodles and cocker spaniels showed off a different set of skills that can save the lives of their disabled owners.

These four-legged helpers are trained not just to help the blind or partially sighted but also to recognise a variety of sounds for the deaf or detect the signs of an impending epileptic fit.

Some of the dogs can recognise the sound of an alarm clock, a knock on the door or a fire alarm - and transmit the information by moving their paws or adopting certain positions.

Veronica Pearce, a spokeswoman for the association Hearing Dogs For Deaf People, which was taking part in the display at Crufts, the world's biggest dog show, said the aim of the charity was to give disabled people their independence back.

Since it was created in 1985, the organisation has helped more than 2,000 people.

"If someone requests a certain sound at application stage, we will make sure that the dog is trained ready for that," said Janine Hovey, a 27-year-old trainer.

One example is training dogs to react to baby monitors.

"If they've got a child, and they want to be able to hear the baby monitor, we can train the dog for that specific sound," she said. 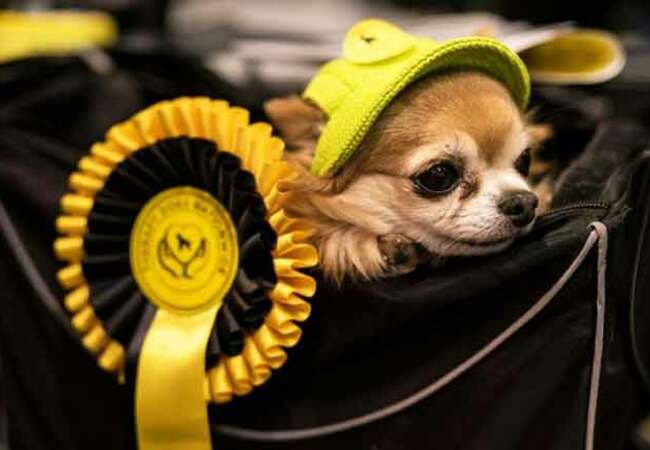 Some dogs at Crufts, like the long-haired Chihuahua dog, can be carried in bags

'Got my freedom back'

For the past three years, John Morris, a former warehouse worker based in Leeds in northern England, has had Theo, a cocker spaniel given to him by the association.

"I have now got my freedom back. Without him, I could not go out," said Morris, who lost his hearing 15 years ago because of his job and now works as a volunteer for the association.

For Morris, it is about more than having a dog who can hear for him.

Walking around with Theo and the curiosity that the dog arouses has given Morris his confidence back.

"I now talk to people, whereas I didn't before. I couldn't look at people in the face," he said.

In total, more than 7,000 people in Britain are helped by a dog, including around 5,000 for the blind or partially sighted.

Diagnosed with epilepsy in 1998, Lynn Radcliffe lost her driving licence and her job and had to give up going to football games.

"It was really dangerous to go out on my own. Just simple things like crossing the road were dangerous - I could have gone into a seizure without warning, so I had to have someone with me."

The arrival of Simba, a labrador trained by the association Support Dogs, has changed things.

"There are very subtle signals that we wouldn't see, but dogs are very good at picking these signals up," said Rita Howson, the director of the association, which also helps adults with physical handicaps and autistic children.

"They can warn the person between 15 or 50 minutes prior to that seizure happening."

While a warning bark fails to prevent an epileptic seizure it does give time for people to prepare for it.

"It makes life safer in the house," said Radcliffe.

Britain set to announce action against Russia over spy poisoning