Russian ambassador to Uganda Alexander Polyakov invited Ugandans to Russia assuring them that they will not need visas to the country.

Russian ambassador to Uganda Alexander Polyakov invited Ugandans to Russia assuring them that they will not need visas to the country.

Elizabeth Tendo won an all expenses paid trip to the Russia 2018 World Cup after answering a question correctly during a dinner at Serena Hotel poses besides the trophy. PHOTOS: Michael Nsubuga

Elizabeth Tendo was only dragged to the World Cup trophy tour corporate dinner at Serena Hotel by a friend, but she ended up with no regrets after she won an air ticket to watch the Russia 2018 World Cup courtesy of Coca Cola.

When Coca Cola Managing Director Conrad Van Niekerk asked his second question; When was the current FIFA World Cup trophy first received? Tendo was the first to put up her hand and answered correctly that it was in 1974-Germany. She got the nod from Conrad that she had won herself a ticket to the World Cup.

"God has a very weird way he does things. I was at work and a friend offered me a ticket to come and be near the World Cup, but boom, here I am going to Russia, I cannot wait to get there," an overwhelmed Tendo who works at NBS said.

"It wasn't in my plans but I'm now totally ready for the World Cup," the Manchester United and Germany national team fan said.

Russian ambassador to Uganda Alexander Polyakov invited the Ugandans to Russia assuring them that they will not need visas to the country, but only a valid travel document, at least a match ticket for one of the games, and a fan ID.

"This occasion fills us with anticipation of the World Cup that will take place between June 14 and July 15. We invite all of you because we are confident our country will organise an outstanding tournament in our traditional and cordial way, providing top security without affecting the rights of the footballing fans," Polyakov assured. 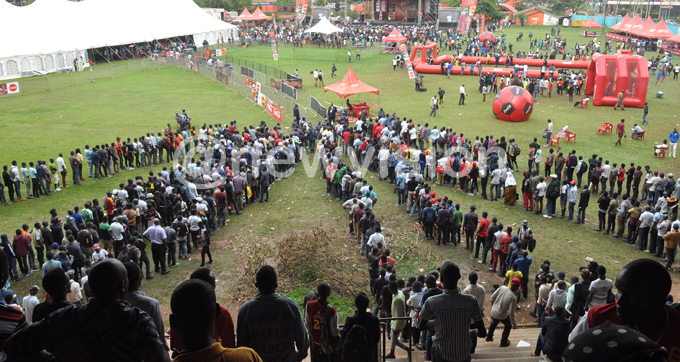 Fans line up to see the trophy at Lugogo, Kampala

Sharon Keith the Marketing Director, South and Eastern Africa Business Unit said Coca Cola has been an official sponsor of the World Cup since 1978 and Uganda was one of ten countries in Africa and 51 in the world that had the privilege of hosting the world cup and it hat it was a gift for the Ugandan people as a reward for their passion.

"Whenever the Cranes lose they break our hearts, but we keep on supporting them and whenever there is football the true spirit of the country comes out and we are delighted for this opportunity," Kadaga remarked.

"I would like to encourage Ugandans to travel to Russia to witness and support the teams that will be there, let us go and support good football," Kadaga stated.

Minister of Education under Secretary Aggrey Kibenge who represented the Minister of State for Sports Charles Bakkabulindi said Uganda is a footballing nation that harbours high ambitions of qualifying for the World Cup.

"I want to thank Coca Cola for believing in Uganda and bringing this trophy in the country. Government is committed to supporting the Cranes in their pursuit of World Cup qualification," Kibenge said.

On Tuesday thousands of fans turned up at the Cricket Oval Lugogo for the final trophy viewing with each of the fans walking away with a memorable picture of them and the trophy amidst musical and sporting entertainment.