State minister for higher education, John C. Muyingo has asked the Uganda Nurses and Midwives Council to allow boys take nursing and midwifery courses at a higher level like their female counterparts.

"It is unfair; I asked one of the ladies who had delivered, and another who is a potential mother that which gender of a midwife they would prefer. One of them preferred a man saying that they are gentler and the other preferred a fellow lady."

Muyingo advised the Uganda Nurses and Midwives Council to initiate discussions regarding the enrolment of male students in midwifery programs, at least at diploma as it is done in other countries in the East African region.

While presenting the results by Uganda Nurses and Midwives Examinations Board ( UNMEB), the executive secretary Hellen Karatambi said that candidature has increased where 6,767 candidates sat the exam from 67 accredited nursing and midwifery training institutions.

Muyingo commended the increase in candidature. However he said: "I pray that one day we shall have as many men as women doing midwifery and nursing, why not? Why should only the ladies take all the money there is in that area when we men are starving? I want to see 50%."

Some of the male nurses and midwives from Nsambya hospital

Unlike the previous exam releases; PLE, UCE and UACE that were marred with exam malpractice leading to withholding of results, Karatambi said their board conducted a malpractice free examination series.

"All candidates complied with regulation 9(3) of the UNMEB examination regulations and therefore no results have been recommended for withholding," she said.

Critical courses yet not attracting students

The UNMEB chairperson, Mariam Walusimbi expressed concern that there is inadequate performance in mental health nursing. "We recommend that the tutor recruitment undertaken by the education and sports ministry gives priority to tutors of mental health nursing," she said. 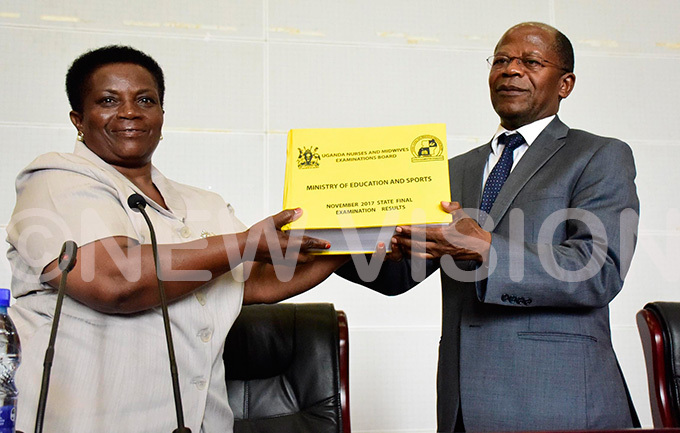 The Chairperson of the Board of Uganda Nurses and Midwives Examination Board, Mariam Walusimbi hands over the November 2017 Uganda nurses and midwives state final examination results to the state minister John C. Muyingo

Walusimbi also noted that diplomas in paediatrics, child health nursing and public health nursing are not attractive to students.  "Only 0-5 candidates were registered for those courses in a span of three years. I ask the ministry to investigate why are less attractive and establish the cost effectiveness of conducting those programs."