PIC: Berlusconi's rightwing coalition is on course to win the most votes in Sunday's election. (Credit: AFP)

ITALY - Italy's rival political parties wrap up a bitter campaign on Friday ahead of an election on Sunday in which former prime minister Silvio Berlusconi could once again play a leading role.

The anti-establishment Five Star Movement, the anti-immigration League party and the ruling centre-left Democratic Party are holding their final rallies before a day of silence on Saturday.

The campaign has been dominated by concerns about immigration and the far-right is expected to make major gains, while the populist rhetoric of the Five Star Movement is also likely to score well.

But the final polls in the election indicate that Berlusconi's four-party rightwing alliance will win the most votes after his promises to expel 600,000 "irregular" migrants and slash taxes.

A three-time prime minister of Italy whose career has been shadowed by sex scandals and court cases, the 81-year-old Berlusconi cannot himself hold elected office because of a fraud conviction.

But on Thursday, he unveiled European Parliament President Antonio Tajani, a close ally since the tycoon first entered politics in the early 1990s, as his choice for prime minister if he wins.

"I thank Berlusconi for his gesture of respect in my regard. I have indicated to him this evening my readiness to serve Italy," Tajani tweeted.

Berlusconi's coalition on Thursday held its first and last joint campaign event in a bid to dispel rumours of severe divisions between Berlusconi and eurosceptic League leader Matteo Salvini.

Salvini has prime ministerial ambitions of his own and has indicated that he should receive the nomination if his party wins more votes than Berlusconi's Forza Italia (Go Italy).

The Five Star Movement also on Thursday broke with tradition to unveil its list of ministerial nominees ahead of the vote, many of them academics with no previous experience in politics.

"Some people have mocked this decision but we will be the ones laughing on Monday," said Luigi Di Maio, the web-savvy populist party's 31-year-old prime ministerial nominee.

The nominations included three women for the top posts of interior, foreign and defence ministers and left-wingers to steer Italy's fragile economy.

The slow recovery has been another major issue in the campaign and Prime Minister Paolo Gentiloni of the centre-left Democratic Party got a welcome boost on Thursday from some positive results. 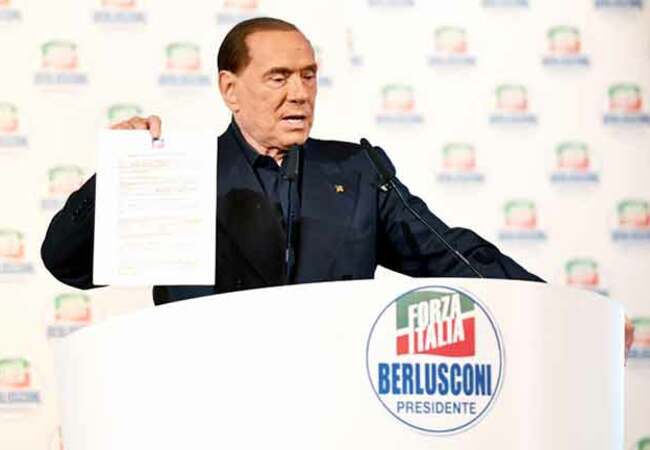 Economic growth for last year was revised up to 1.5 percent from a previous estimate of 1.4% and the public deficit fell to 1.9% of GDP - its lowest level in a decade.

But many Italians say they are not feeling the effects of economic recovery and gross domestic product is still 5.7% lower than at the start of the global financial crisis in 2008.

"Whatever the election outcome, I do not believe anything will change," said Imma Arco, a 28-year-old pharmacy graduate from Naples who is moving to Britain to further her career.

All the main parties have promised to tackle a sharp growth in poverty in what is one of Europe's most unequal societies.

Their proposed measures range from a universal basic income put forward by the Five Star Movement, to promises of an official minimum wage from the Democratic Party which has warned of the need to maintain budgetary discipline.

Italy has a new complex electoral system in place -- a mixture of proportional representation and first-past-the-post - which makes the outcome of this vote particularly difficult to predict.

Analysts have said the three main possible scenarios are an outright victory by Berlusconi's grouping, a grand coalition between him and the Democratic Party or a more temporary government shaped by President Sergio Mattarella.

Commentators have warned over the harsh anti-immigration tone of the campaign, which has seen numerous clashes between anti-fascist and far-right activists across the country.

The atmosphere soured particularly after a racially motivated attack on February 3 by a far-right gunman in the central city of Macerata that left six African migrants injured.

At a rally in Rome on Thursday by the neo-fascist group CasaPound, which is hoping to enter parliament for the first time, supporter Alberto Palladini told AFP that traditional political parties "are corrupted to the core".

"CasaPound finally will be the credible alternative for the Italian people," he said.