"In making these changes, I have been conscious of the need to balance continuity and stability with the need for renewal, economic recovery and accelerated transformation."

"In making these changes, I have been conscious of the need to balance continuity and stability with the need for renewal, economic recovery and accelerated transformation."

Ramaphosa stamped his mark on the presidency with his choice of Nene, while David Mabuza, the current premier of Mpumalanga province, was controversially named as deputy president.

Ramaphosa announced a total of 30 changes to minister and deputy minister positions after graft-tainted Zuma was forced to resign by the ruling ANC party earlier this month.

"In making these changes, I have been conscious of the need to balance continuity and stability with the need for renewal, economic recovery and accelerated transformation," Ramaphosa said, reading a brief televised statement.

Several Zuma allies were demoted or sacked -- but Zuma's ex-wife Nkosazana Dlamini-Zuma was appointed minister to the presidency, responsible for planning, monitoring and evaluation.

Ramaphosa narrowly beat Dlamini-Zuma in a fierce contest to be elected the new leader of the ANC in December.

Dlamini-Zuma was seen as Zuma's favoured candidate to succeed him as president, with analysts saying she may have shielded him from prosecution over corruption charges.

Nene's return to the finance ministry was a clear repudiation of Zuma's reign, and will be warmly welcomed by many businesses and international investors.

In December 2015, Zuma sacked the widely-respected Nene and replaced him with a little-known lawmaker, triggering panic among investors and a sharp drop in the rand currency.

Just four days later, Pravin Gordhan was appointed to the role to calm the markets. 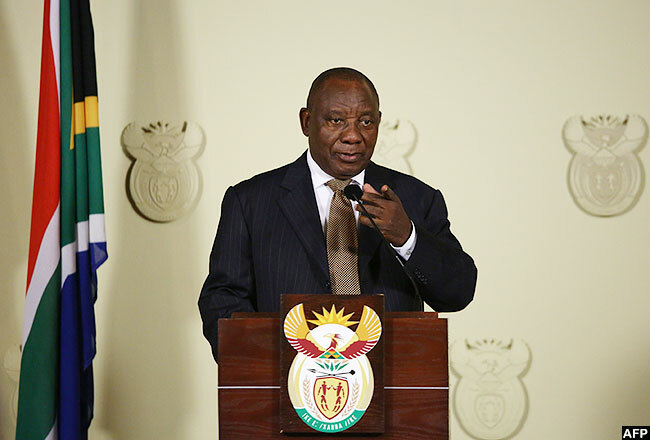 The chaos was seen as reflecting Zuma's failure to implement a consistent economic policy -- and a sign of the allegedly corrupt influence of the Gupta business family, who were reported to oppose Nene.

"A business-friendly cabinet reshuffle is counter-balanced by the retention of Zuma-era appointees," economic analyst Daniel Silke said on Twitter, describing it as "a partial cleansing of the Zuma-era rot."

Ramaphosa has pledged "a new dawn" for the country and to tackle the corruption that Zuma is accused of fostering.

Amid falling popularity with voters, the African National Congress (ANC) party -- which was led to power in 1994 by Nelson Mandela -- had threatened to oust Zuma via a no-confidence vote in parliament.

Zuma resigned reluctantly, complaining he had received "very unfair" treatment from the party.

Mabuza's appointment as deputy president is likely to stir controversy due to his reputation as a tough hardliner and accusations of links to political violence.

The opposition Democratic Alliance party said Ramaphosa choosing Mabuza "undermines the integrity of his stated commitment to fight corruption and rebuild from the tatters of the Zuma decade."

Mabuza "has been accused of having his own personal 'military' which have allegedly been responsible for numerous political killings", the DA added.

Ramaphosa, 65, is a former trade unionist who led talks to end apartheid in the early 1990s and then became a multi-millionaire businessman before returning to politics.

The Guptas are accused of receiving hugely favourable government deals and even influencing cabinet appointments under Zuma.

At least one of the three Guptas brothers is now being sought by police.