Over 400 graduate at YWCA
Next Story

The group had time to interact, play, sing and teach children how to play the guitar

The group had time to interact, play, sing and teach children how to play the guitar

The Irish-based international band, the Celtic Thunder, has praised Uganda's beauty as breath-taking and the people as friendly.

The bandmates expressed the sentiments after a week-long stay and tour. The group, represented by a team of four, was on a mission as goodwill ambassadors.

They were in the country to acclimatize with the work of Canadian non-governmental organisation Christian Blind Mission (CBM). The organisation offers medical care to children in Uganda through the Comprehensive Rehabilitation Services in Uganda (CoRSU) under healing hugs programmes.

"The skies are great, adorable and forests are beautiful. We love your weather. God has blessed Uganda," Michael O'dwyer, a crooner and guitarist said.

"Uganda is such a unique country, people are welcoming. I fell in love with the nature here," Ryan Kelly, also a singer, said.

Sharon Browne, the producer of the band, said there is evidence of economic stability.

The group had time to interact, play, sing and teach children how to play the guitar. 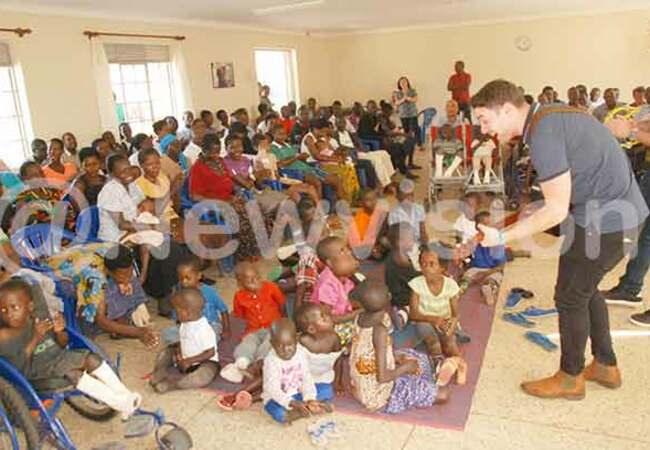 The Irish band entertaining children and their parents

"CoRSU performs 53,000 subsidized surgeries every year to children with disability under the age of 18 and 80% of physical disability in Uganda can be prevent, reduced and cured," Naggi explained.

He added that because of the conducive environment, especially peace  in Uganda, CoRSU  also offers subsidised treatment to patients of South Sudan, Rwanda, DR Congo (DRC) and Burundi.

The Celtic Thunder has over 200 songs, and is popular in the US. It produces five international television shows.

Their songs are characterised by rhythms that are an emblem of the tradition of paying homage to the culture and traditions of Ireland.

Their shows are always known to feature lively, fast-paced and upbeat songs such as ‘A Place in The Choir, Galway Girl, Raggle Taggle Gypsy, that represent the fun loving nature of the Irish.

The slower classic ballads include Black Velvet Band, Noreen and Mountains of Mourne that portray a more nostalgic and romantic. The place in the Choir and Seven Drunken Nights all serve to showcase the musical talent of each soloist.

Drinking lots of coffee is safe

Soda found to cause violence in children