Buganda Katikkiro Charles Peter Mayiga has applauded the partnership between the Catholic Church and Buganda Kingdom.

"As Buganda Kingdom, we are proud of the fruits like schools and hospitals, which are a result of welcoming missionaries by Ssekabaka Muteesa I," Mayiga said.

He made the remarks at the event organised by the Kampala Archdiocese, to mark the day Kabaka Muteesa met the first missionaries. The event was held Sacred Heart of Mary Cathedral in Rubaga, Kampala, on Thursday.

The first two missionaries arrived at Kyattale in Kigungu landing site in Entebbe on February 17, 1879.

They flamed Catholicism and are revered for their faith, courage, and countercultural witness to Jesus Christ.

The day organised by Good Samaritan department in Kampala Archdiocese, was marked under the  theme, The Catholic Church and Buganda Kingdom 1879-2018: Together in the Service of Life."

The ceremony was crowned with Holy Mass led by Pope Nuncio to Uganda, Archbishop Michael August Blume, with assistance from Monsignors Matthias Kanyerezi, the vicar general of Kasana-Luwero and second vicar of Kampala Lawrence Ssemusu. 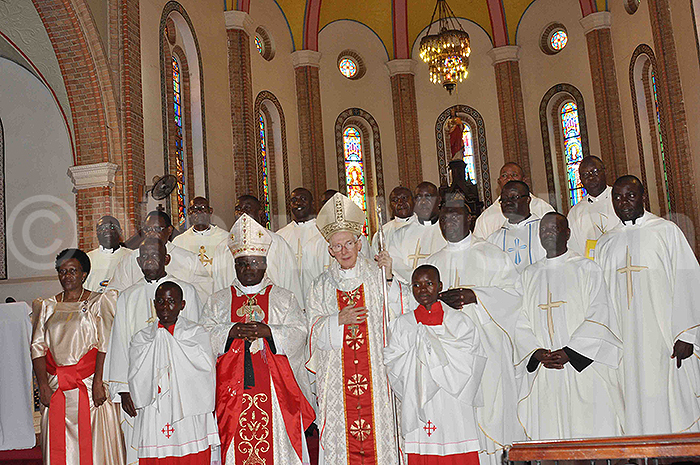 Clerics at Rubaga Cathedral after the Holy mass on Thursday. The day had been set aside to mark the works of Uganda's first two missionaries. (Credit: Juliet Lukwago)

He said Uganda would still be in the ‘dark' if the missionaries never spread the word of God.

Blume called on Christians to be resilient and exercise their faith just Mapeera and Amans did to spread the word of God.

He said the missionaries journey from Zanzibar to Uganda was of hardship as they braved forests, wild animals, mosquitoes, language barrier, enroute to southern shore of Lake Victoria, before reaching Kigungu.

"So the faith of all of you who have come here can trace its origins to the lives and witness of these missionaries. They planted seeds of faith, which have grown more than they would have ever imagined. Every generation that is born of faith and baptism is also called to share to pass on that same faith, to evangelise, which is a great act of love for one's neighbor," Blume said.

Mapeera and Amans were part of first caravan of 10 white fathers, who left Marseilles, France on April 21, 1978, five destined for Uganda and other five for mission of further west.