“State parties should guarantee the rights and needs of victim survivors are provided,” O-Gon Kwon said during a press conference held at Sheraton Hotel on Thursday.

“State parties should guarantee the rights and needs of victim survivors are provided,” O-Gon Kwon said during a press conference held at Sheraton Hotel on Thursday.

PIC: Left-right: Pieter de Baan the executive director Trust Fund for Victims, Judge O-Gon Kwan the president of the Assembly of States Parties to the International Criminal Court, Kevin Kelly the Irish Ambassador to the Netherlands and Mama Koita Doumbia the board member Trust Fund for Victims during a prees conference at Sheraton Kampala Hotel on Thursday 22 February 2018. (Credit: Godfrey Kimono)

KAMPALA - The newly elected president of the assembly of state parties, O-Gon Kwon, has called on state parties of the Rome statute to step up providing assistance to survivors of war.

"State parties should guarantee the rights and needs of victim survivors are provided," he said during a press conference held at Sheraton Hotel on Thursday.

Kwon, who became president in December 2017, noted that though the Trust Fund for Victims (TFV) is doing a tremendous job in Northern Uganda, there is still a big funding gap that needs to be filled.

"During my mandate I will do my utmost to promote the important work of the Trust Fund for Victims and the need for sufficient funding to carry out its mandate," he said.

The press conference was organised to give an update on the findings of an evaluation visit to northern Uganda by the ICC state parties, to monitor the progress of the implementation of TFV.

TVF was created in 2002 under the Rome Statute as a response programme to the harm occasioned by crimes under the jurisdiction of the International Criminal Court (ICC).

It ensures the right of the survivors and their families through the provision of reparations and assistance. It carries out psychological and physical rehabilitation, and material support. 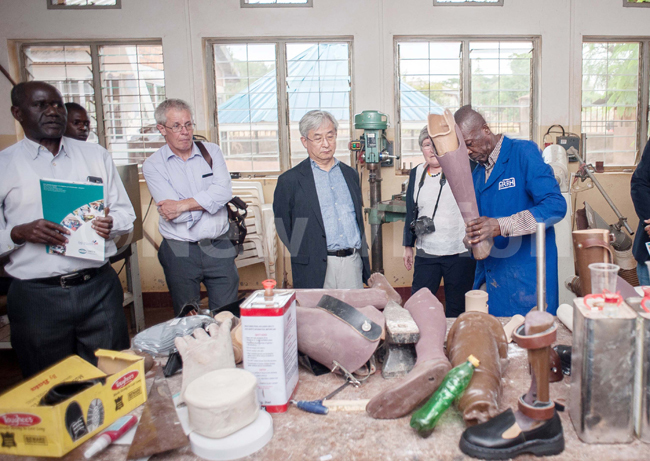 Judge O-Gon Kwan the president of the Assembly of States Parties to the International Criminal Court with a delegation from the Trust Fund For Victims visiting a workshop where artificial limbs are made, at Gulu Referral Hospital. (Credit: Godfrey Kimono)

The implementation of the TFV started in 2008 in northern Uganda and according to Peiter de Baan, its executive director, more than 45,000 people have benefitted directly and about 200,000 people indirectly.

The visit to northern Uganda was also in commemoration of the 20th anniversary of the Rome Statute. The joint visit was made by Kwon, representatives from the government of Canada, Chile, Denmark, Ireland, Finland, Sweden, Norway, UK and European union.

Mama Koite Doumbia, a TFV board member, noted that the central importance of the Rome Statute is to provide the rights and the needs of victims, including the right to receive reparations and assistance they need.

"Any harm caused by war crimes, crimes against humanity and genocide is significant and must be addressed," she said.

Mirjam Blaak, Uganda's ambassador to the Netherlands noted that TFV has made a significant progress in providing assistance to the victims.

"The government of Uganda commits to continue its support to the TFV in assisting many more victims, their families and local partners, to sustain a lasting impact in the country," she said

Kasirye Ggwanga to be accorded a scientific burial