US presidents lead tributes to 'America's ...
Next Story

US President Donald Trump takes part in a “listening session” on gun violence with teachers and students in the State Dining Room of the White House on February 21, 2018. AFP PHOTO / MANDEL NGAN

US President Donald Trump suggested arming teachers to deter mass shootings as he faced broken voices, tears and demands for action at a meeting with survivors of the gun rampage that killed 17 people at a Florida high school.

Trump also promised "very strong" background checks on gun owners during the poignant "listening session," in which he heard first-hand accounts from bereaved parents and friends, and schoolchildren who narrowly escaped with their own lives.

"If you had a teacher who was adept at firearms, they could very well end the attack very quickly," Trump said, suggesting that 20 percent of a school's teachers could be trained to carry concealed weapons.

"This would only be obviously for people who are very adept at handling a gun," Trump added.

Holding signs reading "Never Again" and "Be The Adults, Do Something," teenaged survivors of last Wednesday's shooting rallied outside the Florida state Capitol in Tallahassee.

"No longer can I walk the halls I walked millions of times before without fear and sadness," Stoneman Douglas student Florence Yared told a crowd that included thousands of supporters.

'My daughter has no voice'

"No longer can I walk the halls without imagining bloodstains and dead bodies," the 17-year-old junior said. "All because of the damage that a single AR-15 rifle caused."

The White House meeting was attended by Stoneman Douglas students, their parents and also the parents of victims of the Columbine, Sandy Hook and other shootings.

Andrew Pollack, whose 18-year-old daughter Meadow was among the Stoneman Douglas victims, told Trump it was far too easy for people such as the 19-year-old shooter gunman Nikolas Cruz to acquire weapons.

"I'm here because my daughter has no voice. She was murdered last week and she was taken from us, shot nine times," he said. "We as a country failed our children. This shouldn't happen. 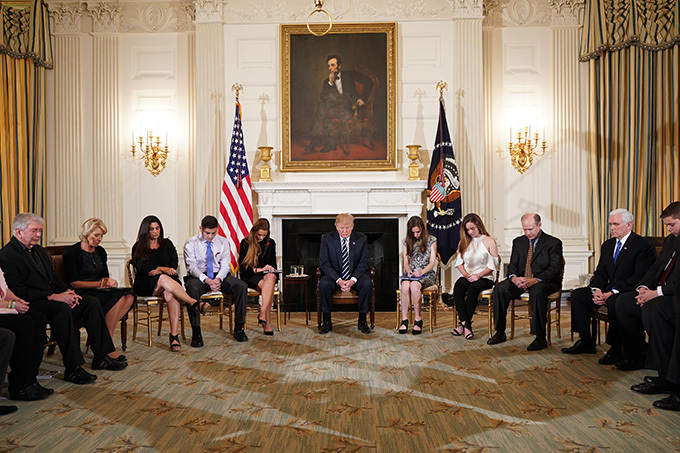 US President Donald Trump takes part in a "listening session" on gun violence with teachers and students in the State Dining Room of the White House on February 21, 2018. Trump vows 'strong background checks' as he met with school shooting survivors. / AFP PHOTO / Mandel NGAN

"We protect airports. We protect concerts, stadiums, embassies," Pollack said, his voice seething with rage. "I can't get on a plane with a bottle of water, but we leave some animal to walk into a school."

Justin Gruber, a 15-year-old Stoneman Douglas student, said "there needs to be significant change in this country because this has to never happen again.

"People should be able to feel that when they go to school they can be safe," Gruber said.

Samuel Zeif, who lost a close friend at Stoneman Douglas last Wednesday, said it was important to "be strong for the fallen who don't have a voice to speak anymore."

"Let's never let this happen again. Please," he told the president, later adding: "I don't understand why I can still go in a store and buy a weapon of war."

Urgent calls for action following the 2012 Sandy Hook massacre, which left 20 children and six teachers dead, had failed to break the national deadlock on gun control.

But students have vowed to make the Parkland tragedy a turning point, with youths inspired on social media by the activism of their peers staging walkouts from high schools in Florida and elsewhere on Wednesday.

Hundreds of students descended on city hall in Minneapolis, Minnesota, and marched in other cities, including Chicago, the Midwestern metropolis racked by gun violence.

In Washington, hundreds more gathered outside the White House chanting slogans against the National Rifle Association (NRA), the powerful gun lobby, and demanding action from Trump.

Students are planning a march on Washington on March 24, with sister rallies planned across the country.

Trump -- who received strong backing from the NRA during his White House run -- has shown a new-found willingness to take at least some steps on gun control following the Parkland shooting.

The president threw his support Tuesday behind moves to ban "bump stocks" -- an accessory that allows a semi-automatic rifle to be fired nearly as fast as an automatic weapon.

But his suggestion of arming teachers drew scorn from some.

"What I heard today is that we need to arm students and teachers so that we'll have shootouts in the hallways? I mean, come on. There was pandemonium," said Fred Guttenberg, whose daughter was killed in the shooting.

"I'm enraged. I want to hear real solutions," he said.

"We don't need to put guns in the hands of teachers," he said. "We need to arm our teachers with more money in their pocket."

The idea of countering school shootings with additional weapons is already being put in place in Broward County.

Sheriff Scott Israel announced Tuesday that "deputies who are qualified and trained will be carrying rifles on school grounds from this point forward."

CMI boss to sue the BBC

The fall of Idi Amin regime and how I watched it