In today's New Vision: Gov't may fail to p...
Next Story

PIC: Mulyagonja (third-right) with a delegation of the members of the heads of the European Union and her staff at the Jinja regional IGG offices recently. (Credit: Jackie Nambogga)

JINJA - The Inspector General of Government, (IGG) Irene Mulyagonja has regretted the lack of a law that protects witness, saying this has discouraged people from reporting corruption-related cases.

Mulyagonja made the remarks while briefing a delegation of members of the heads of the European Union at the Jinja IGG regional offices recently.

Led by the head of Co-operation Netherland Embassy, Joris Van Bommel, the delegation was on a fact finding mission aimed at sharing knowledge on how Uganda was tackling, investigating and prosecuting corrupt government officials.

"Many people have wished to be witnesses, but they fear because we currently do not have any law that protects them, hence affecting our investigations," Mulyagonja lamented.

She explained that this usually occurs in big cases where witnesses and the accused work within the same institution.

"When witnesses in such cases reach court, they become afraid of giving evidence against their bosses," she said.

Mulyagonja added: "In such situations, the witnesses become hostile or they do not appear in court to testify. And by law, we cannot force someone testify in court."

If the witness protection law was in place, Mulyagonja said, this would ease their work of investigation and prosecution. 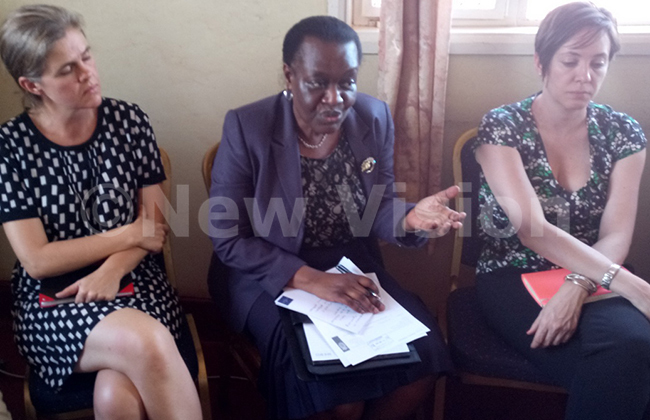 Mulyagonja (centre) seated beside some members of heads of the EU during their visit at the Jinja IGG regional offices recently. (Credit: Jackie Nambogga)

Mulyagonja explained that the only protection provided by the inspectorate regarding the witnesses was not prosecuting them once they testify on their behalf.

She said this was merely a practice by the inspectorate, but there were no specific provisions within the law not to prosecute the witnesses.

Therefore she noted the need for the Government to speed up with several avenues geared towards protecting the witnesses.

Mulyagonja said the laws should not stop at protection alone, but also with financial resources as it requires changing their identities, as well as putting them in secure places to avoid being persecuted.

The IGG also decried the meagre budget allocated to whistleblowers in instances that lead to recovery of monies.

According to the law, Mulyagonja said, whistleblowers are meant to earn 5% of the proceeds from the recovered monies in corruption cases, but her body was not fulfilling this.

As a result, Mulyagonja said, this was also frustrating efforts to register complaints at the inspectorate, saying this must be checked.

Consequently, she suggested that the Government provides for the whistleblowers' 5% within the budget awarded to the body.

Although the current whistleblowers law gives them immunity against victimisation within their institutions, this was to the contrary in the communities from where they report from because the law does not give them protection.

Once whistleblowers are victimised or threatened, Mulyagonja said, their investigations are tampered with, adding that there is need to come up with a mechanism of protecting them.

In some incidents, she said some whistleblowers opt to remain anonymous and when victimised, the inspectorate cannot protect them due to lack of evidence that they are the rightful anonymous whistleblowers.

She cited an ongoing scenario of a whistleblower being prosecuted within his institution for violating its rules.

"We have a case where a whistleblower is being prosecuted by his institution for violating its rules, we know that he brought a complaint but because he did not identify himself at the beginning and also leaked a dossier to the press, we couldn't protect him," she said.

Meanwhile Bommel urged the Ugandan Government to enact the said laws for the inspectorate to effectively perform its duties.

He said this will enable the inspectorate to recover the unaccounted stolen monies by government officials that would help in improving the wellbeing of its citizenries.

Who can help artists?