MENU
Do not ignore pursuing fashion designing, it is paying
Previous Story

Winners of the 2017 Teachers Making a Difference recently went on a week-long tour of Ireland, courtesy of New Vision, the Irish Embassy in Kampala, Trocaire and Simba Travelcare, a leading tour and travel management company. John Eremu travelled with them and now writes

A history lesson was going on when we entered the class. The sight of four strangers — and Africans at that — was certainly disruptive. The fourth class pupils of St. Patrick's Boys Primary School in Drumcondra, in the Irish capital of Dublin, struggled to stay focused on the lesson.

After we settled at the back of the class of these 10-year-olds, teacher Cliona Collins continued with the history lesson, which appeared more of a combination of history, geography, health science and mathematics.

In Ireland, the pupils take the centre stage in the learning process, said Therese Hegarty of Froebel Department of Primary and Early Childhood Education at Maynooth University. Innovative teaching techniques are used to instil critical thinking and group problem solving skills early in children. The other skills inculcated in the pupils early are listening and respect for others.

A typical classroom is best described as a ‘talking classroom', with informatics all over the classroom walls. iPads, projectors and giant screens have replaced chalkboards in Irish classrooms. The teachers, too, mean business and are well-prepared for their lessons.

"I took two weeks to prepare for this (history) lesson," teacher Cliona said.

While the lesson was on the famous Irish famine of 1876, the teaching aids splashed all over the classroom included the world map on Irish migration to the various parts of the world, especially the US.

Maps had arrows pointing to India, where the Irish food was being exported by Britain (the colonial power) while the Irish starved. An overhead projector was then used to screen various scenarios depicting the famine, human displacement and diseases, which the pupils were asked to interpret.

Unlike in most Ugandan schools, the pupils were paired, allowed to discuss and present their answers to the whole class. Teacher Cliona would move from pair to pair listening to the children and encouraging them.

"This is called paired teaching," said Cliona when asked what was happening.

"All children are bright, but some fear speaking out until they are sure they have the right answers. So we pair them up, allow them to discuss and make their presentations. Everybody must present. That way, we build confidence and presentation skills in every pupil," she clarified.

In another class of 11-year olds, the pupils were busy on their iPads when we entered. Oblivious of our presence, they frantically worked in pairs to surf the Internet for solutions to the environment challenge teacher James Moraghan had given to them. In the pairs, one of the pupils would jot down the answers, which they would then take to the teacher for marking. At the end of the exercise, each pair would make a presentation on their findings.

The chalkboard (blackboard), widely used in Ugandan schools, has been discarded in Ireland, not because it is archaic, but because it has limitations and stifles innovation in the delivery of the curriculum, experts said.

One of the handouts given out by Hegarty during her presentation states the ‘chalk and talk' method is only good as far as imparting knowledge with definite answers is concerned.

"For example, if you are teaching children how to add or subtract or how to learn grammar, you will need a blackboard. This is because there is only one answer to the sum of 24 and 51. The answer is 75 and it is not open for discussion. Likewise, the past tense for ‘I speak' is ‘I spoke' and this is not up for discussion either.

However, ‘The Chalk and Talk method' has limits' as discovered by Brazilian educator, Paulo Friere.

"It can get boring. Children can get restless sitting and listening. This kind of education (also called the banking method) is like depositing knowledge in the minds of children just as we deposit money in the bank."

Friere believed the purpose of education was to bring about more justice and he was interested in teaching adults and children how to think rather than what to think. He believed that members of a community could come together to talk about the problems they faced, analyse why those problems were happening and as a community take steps for change.

This is called the "problem posing methodology" or the ‘psycho-social methodology'. "When we have problems such as inequality or violence, children need to learn how to think, so they can respond now and in future." 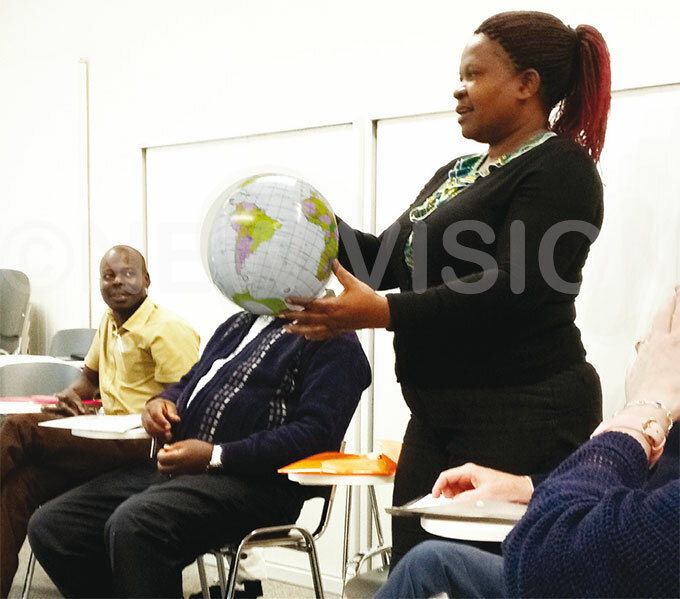 Prossy Muyinda in a demonstration lesson that stimulates critical thinking at Frobel Department of Primary Education, Maynooth University in Ireland

As opposed to the lecture method common in Uganda, where the teacher is the main source of information, in Ireland, the teacher seems to be more of a facilitator — posing lead questions and asking the children to think, research and work in groups to find solutions. This way, co-operation, respect for other, research and critical thinking skills are inculcated.

In the class of seven to eight year-olds, where the Irish language class was going on, teacher Catherine McBride used a combination of audio and visual aids to instruct.

On a giant touch-screen, the pupils, who greeted us in Luganda (Oli otya), would touch a picture and the word would pop out and a pre-recorded pronunciation would bellow out. Listening and reading skills are instantaneously imparted.

In the three classes the Ugandan teachers visited, they were allowed time to engage with the pupils. They asked lots of questions. The questions ranged from the distance from Uganda to Ireland, how long it took us to travel, the popular sports in Uganda, the cuisine to how big the classes are. You could see the pupils visibly shocked when told that Ugandan classes are as big as 60, reaching to 100 pupils per class in some cases. In Ireland, the class ratio is 20 pupils per teacher at primary and not more than 16 students per teacher in secondary. In all cases, time was never enough to respond to all the questions.

The various teaching techniques were, therefore, a good lesson for winners of the 2017 Teachers Making a Difference project, who were in Ireland for a week-long study tour from January 27 to February 4, 2018.

"We surely need to improve on the way we deliver the content to our children," remarked Martin Kananura of Mbarara Municipality Primary School, one of the winners.

"Here, it is done very well, with lots of visual aids. The teachers also seem to be very organised and hardworking. In one of the classes, a teacher told us she took one week to prepare for a lesson. Here, everybody is a learner. There is a lot of research, interaction and participation. So, we need to change something on the way we prepare for our lessons," Kananura said.

Emmanuel Angoda of Lira Town College was touched by the issue of development education, which gives students a global outlook.

"I will pioneer that in my school in northern Uganda," he promised.

Godfrey Arims of Lemusui Primary School in Nakapiripirit was mesmerized by the methodologies used.

"The methods used here are practical and child-centred, with children taking charge of the learning process with the teacher only acting as a guide. This is something I will go back and implement," said Arims.

Prossy Muyinda of Victoria Junior School, Namutumba, said all students demonstrated lots of respect for each other's views and cultures.

"Here, the teachers are passionate about what they do. You can see it in the way they carry out their duties," said Muyinda.

"Time management is crucial here. They plan for their lessons early enough. I am also taking home that the learner should be at the centre of the learning process and should be involved at every stage," she added.