A history of NGO sex abuse accusations
Next Story

The service attended by over 400 Ugandans from London, Manchester and other cities in the UK was graced by the family of the fallen prelate led by the widow, Ruth Nkoyoyo.

The service attended by over 400 Ugandans from London, Manchester and other cities in the UK was graced by the family of the fallen prelate led by the widow, Ruth Nkoyoyo.

Hundreds of Ugandans living in the United Kingdom converged at St. Alfege Church Greenwich to honour and remember the good works by the late Archbishop of the Church of Uganda, Dr. Livingstone Mpalanyi Nkoyoyo.

The service attended by over 400 Ugandans from London, Manchester and other cities in the UK on Sunday was graced by the family of the late Archbishop Nkoyoyo led by the widow, Ruth Nkoyoyo, who officiated as guest of honour and the heir to the late, Isaac Mwesigwa Nkoyoyo, among others.

The Vicar of St Jude and Aidan Rev. Nathan Ntege and Revd Stephen Nshimye of St. Alfege Church led the service, which was also attended by the Kabaka's Representative in UK and Republic of Ireland, Ronald Lutaaya and his deputies among other dignitaries.

In his sermon, Rev. Stephen Nshimye called upon the congregation to always remember their humble beginnings and thank God for that. He described Nkoyoyo and a special and great servant of God who inspired many clergy and Christians to serve the Lord.

It was a filled service in London. (Courtesy photo)

He praised the Archbishop for his courage to steer the Church during the turbulent times when many Bishops publically expressed different political leanings and for kick-starting projects like the Church House which had stalled for many years among others.

Nshimye also thanked Mrs. Ruth Nkoyoyo and the children for treating the clergy and all people that sought the audience of her late husband, Archbishop Nkoyoyo with great respect regardless of class. 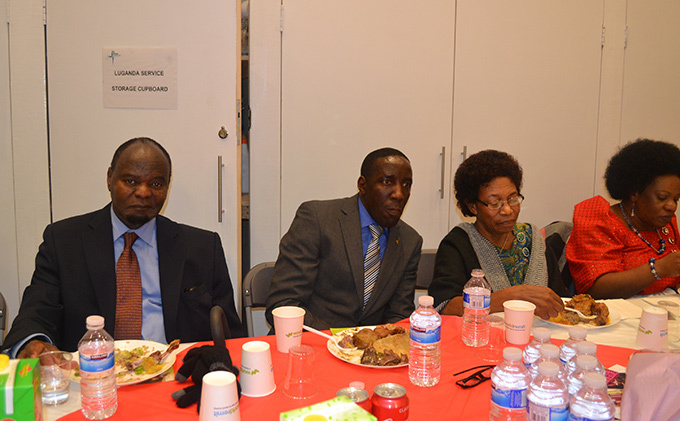 The widow, Ruth Nkoyoyo, in her speech thanked all Ugandans in the UK who responded to the call to fundraise for the late Archbishop's treatment while in UK a year ago and said the treatment was completed and they both returned to Uganda happily, but God had a different plan for his great servant.

The heir, Isaac Mwesigwa Nkoyoyo, appealed to the congregation to continue supporting the works of the late Archbishop through the Namugongo Martyrs Museum programme and supporting the Children Healthy Advocacy Initiative Network (CHAIN) project currently looking after orphans and former street children that include blind children under their care.