Kitatta remanded to Luzira until February 27
Next Story

NRM flagbearer Nathan Igeme Nabeta says he will follow his party’s manifesto and continue lobbying for the people of Jinja East.

NRM flagbearer Nathan Igeme Nabeta says he will follow his party’s manifesto and continue lobbying for the people of Jinja East.

JINJA - The Electoral Commission on Tuesday started the nomination exercise of candidates for the Jinja Municipality East Constituency by-election.

The nomination started at 9:00am local time and four contenders were successfully nominated to contest in the March 15 polls.

On his part, Nabeta said he will follow his party's manifesto and continue lobbying for the people of Jinja East.

His rival Mwiru said promoting health and educational standards in Jinja East rank high in his priorities.  If elected, he said his main focus will be on how to reduce the level of illiteracy in his area.

The FDC hopeful urged his supporters to focus on his campaign programme in order to win the elections. 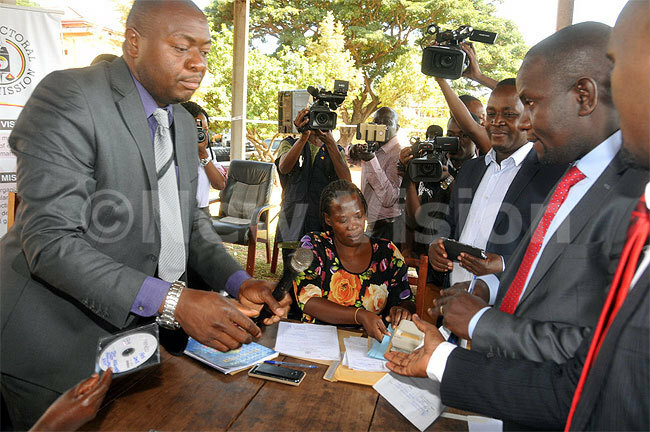 Mwiru (right) was given the go-ahead by the Electoral Commission. (Credit: Donald Kiirya) If elected into office, Mayemba said he will promote various sports talents among the youth, particularly football, adding that many players from Jinja have succeeded in playing for the national team as well as other sides.

Mayemba said many youths in his constituency are unemployed. As such, he plans to lobby for investors to establish more industries in Jinja to create opportunities for the young people.

Meanwhile, the Jinja district Returning Officer, George Sserunjogi, cautioned candidates to desist from inciting their supporters into any acts of violence during campaigns.

After being nominated, the candidates, were accompanied by their supporters to their respective rally venues.

'We shall stop inappropriate literature from schools'