MENU
How China welcome year of the dog
Previous Story

How South Africa's Zuma might leave office
Next Story

KAMPALA - As the district leaders embark on the budget process for the financial year 2018 /2019, women councillors are pushing for equity budget and representations in local government positions.

The female councillors argued that issues affecting women and girls should be incorporated in the budget process for this financial year.

The women councillors made remarks during the planning meeting for women district caucuses in Kampala. The event was organised by Uganda Women's Network.

The meeting was aimed at identifying plausible strategies of advancing gender and women's rights concerns during planning and budgeting processes within the local government and share experiences where women councillors have been able to influence the district leadership.

In order to maintain gender mainstreaming, the district women councillors suggested that the priority areas they want the budget to be responsive include the construction of maternity wards and changing rooms for girls.

"We are going to lobby our district leaders to have the budget that accommodates areas that affect women," Lillian Massia, the chairperson of Moyo district women caucus, said.

She informed her fellow female councillors that during the last financial year, the women councillors of Moyo district were able to advocate the inclusion of an ultra sound machine into the budget.

Massia said as a result, two ultra sound machines were purchased for Moyo Hospital after the old one broke down and this has saved women from paying sh20,000 in town. 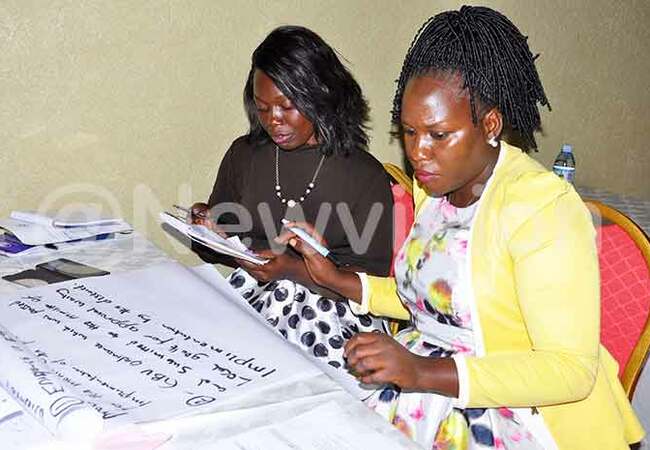 Participants discuss during the event

In addition, the female councillors were also able to push for the construction of a pit for dumping placentas after women have delivered at Laropi Health Centre III.

Joyce Atim, the Kitgum district councillor, also encouraged councillors that it is possible to push for an inclusive budget. She said they were able to have the budget of construction of maternity ward for Namukora Health Centre IV.

"You need to position yourselves so that you are able to influence the decision-making process. Your input is critical in the planning budget process," Sarah Agwang, the programme co-ordinator at Uganda Women's Network, said.

She said the network has trained district women councillors from 15 districts in West Nile, Lango and Acholi sub-regions to ensure they are in a position to influence the leadership at the local government.

"You should have data of issues you are raising so that they can be integrated into the budget planning process. Use your positions instead of obtaining favour," Ofwono said.