As cancer survival rate grows, so does num...
Next Story

Raising a child with a genetic disorder

"His condition has bonded us even more as a family. Everyone in the home brings in their contribution to support the only son in the home."

"His condition has bonded us even more as a family. Everyone in the home brings in their contribution to support the only son in the home."

When Rosy Anand gave birth to her second child Rushil Anand in 2002, she instantly got a feeling that something was not right.

"I thought something was wrong when Anand was born, but I just did not know what it was," she says.

Her instincts were spot on. It was not long until little Anand started having health issues.

A few months to his fifth birthday, the boy started wobbling while walking and would fall frequently, leadiing to head injuries. Then his parents noticed Anand's calf muscles were growing bigger by the day.

So what really was happening to their child?

Rosy and her husband took their son for a number of tests to establish the problem. Tests returned negative results. Nothing peculiar was found.

They then flew him to India in the hope of getting to the root cause of their child's strange turn in health.

"It was one week at home and two in hospital. At first, doctors were at loss of explanations. They could not understand why a child receiving the most appropriate treatment would have relapses every time," Rosy narrates.

Eventually, the medics landed on the problem.

The Anands were told their boy had Duchenne muscular dystrophy, a severe type of genetic muscle disease. Typically, the symptom of muscle weakness usually begins around the age of four in boys and worsens quickly.

The family believed that with some treatment, the problem would soon be gone.

However, experts told them otherwise: Duchenne muscular dystrophy has no known cure.

The Anands did not let that news break them. They were relentless. Determined.

They tried various interventions, such as using stem cells, Ayurveda treatment and homeopathic treatment. But they only ended up spending lot of money on the boy's treatment and regular visits to India without any positive results.

"This disease is not common and it is said to affect mainly boys," she reveals.

"This gene helps the body produce dystrophin, a protein that helps protect muscles. If the gene is affected, the body does not produce dystrophin. Without it, muscle fibres start to break down and are replaced by fibrous and fatty tissue, causing the muscle to weaken," Aciro explains.

The first signs of the disease, she explains further, appear between the ages of one and three. The pelvis and legs are usually affected first, making walking difficult. By eight to 11 years, sufferers are usually confined to a wheelchair.

Other muscles can be affected, too.

Some children also develop learning and behavioural difficulties because of a lack of dystrophin in the brain. Aciro says is a sufferer lives for as long as 30 years, the condition can become life-threatening, as it affects the heart and respiratory muscles. 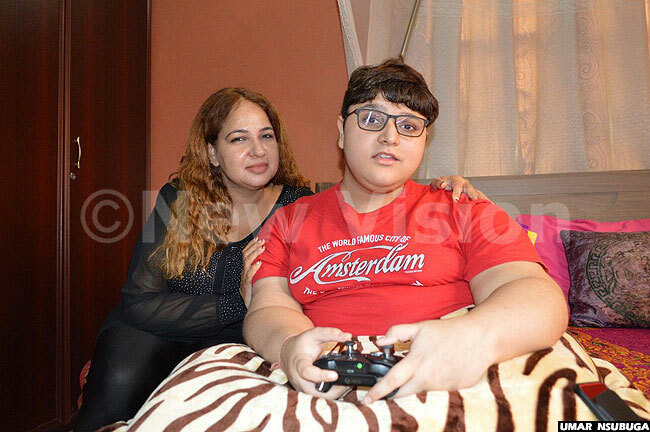 Costly to be in school

The Anands' son has had an unconventional school life.

"Due to his condition, we were forced to hire private teachers. My son went through the greater part of primary school at home. Every time he would go to school, he would return with an infection. It became costly and unhealthy for him to be in school," Atul Anand, the boy's father, says.

Secondary school was also tricky. At his age, he really understands what he wants so he did not want to go school.

"We explained to all the schools his condition and asked them to teach him from home. Every month, doctors have to pick him from home to take him to the hospital for the drug to be administered. He then has to be monitored for another 12 hours from home."

Anand, now 16, therefore has to miss at least two days of home schooling every month, a huge ask for a teenageer with the desire to play and interact with his peers.

But his mother says he is slowly learning to come to terms with his condition.

"As he grows up, he keeps asking questions. He wants to understand why out of all his siblings and friends, only he has to live on medication. It gets tough on you as a parent, but you have to be strong for his sake," the mother says, the pain in her voice evident.

But even in the face of such a obstacle, the Anands remain a determined unit. In fact, Rushil's condition has brought them even closer. It has taken concerted efforts to sustain their son's life.

"His condition has bonded us even more as a family. Everyone in the home brings in their contribution to support the only son in the home," Rosy says.

Theirs is a battle they are ready and willing to fight, "even if it means selling off all that we own".

"There should be investment in research on conditions such as these. Research is really needed because the information we have is that there is no medicine for such a disease. One could find that there are many other children struggling or succumbing to a similar condition," Atul says.

They are praying that, somehow, their son will one day get healed.

Rosy, who is director at Crane Roofings Limited, now spends the entire day taking care of her son. She says she cannot go with her son to work or leave him with someone to take care of him.

No cure, but there is treatment

Muscular dystrophy is caused by a faulty gene which makes the muscle cells break down. This results in mobility problems, which develop between the ages of one to three and which can be accompanied by learning and/or behavioural difficulties.

By their teens, sufferers become unable to walk and by their late teens or twenties, the condition is severe enough to affect life expectancy.

Although there is no cure, the condition can be treated in order to improve quality and length of life.

DMD affects boys almost exclusively. About 100 boys with DMD are born in the UK each year - around one in every 3,500 male births - and there are about 1,500 Britons with DMD at any one time.

Women can carry the gene - their sons have a 50% chance of inheriting the disease, and their daughters 50% chance of being carriers. But in around half of DMD cases, the faulty gene occurs spontaneously.

Is Katuramu on the way out of Luzira?