MENU
On this day 28 years ago...
Previous Story

Flights at Entebbe Airport
Next Story

US - President Donald Trump said Saturday that lives were being "shattered" by allegations that may be false after two of his White House aides quit over domestic abuse accusations.

Trump's White House has been heavily criticised for its handling of the allegations, which come amid a national debate over sexual misconduct and the #MeToo movement that has seen an avalanche of claims fell towering figures across various industries.

Critics say the president's chief of staff, John Kelly, has badly mishandled the matter and that his future at the White House hangs by a thread.

"People's lives are being shattered and destroyed by a mere allegation," Trump tweeted.

"Some are true and some are false. Some are old and some are new. There is no recovery for someone falsely accused - life and career are gone. Is there no such thing any longer as Due Process?"

The remark by the president - himself the target of numerous harassment claims - came after White House speechwriter David Sorensen resigned on Friday, even while denying his former wife's claims of abuse.

And staff secretary Rob Porter stepped down Wednesday after abuse allegations from two ex-wives became public that he too denied.

Trump not only accepted Porter's claim of innocence, but praised him for doing "a very good job" and offered his wishes for "a wonderful career" ahead.

The president has stood by other men - including Roy Moore, the Alabama Republican who ran unsuccessfully for the US Senate - when they faced allegations of abuse or harassment, while rarely expressing sympathy for the women who accused them. 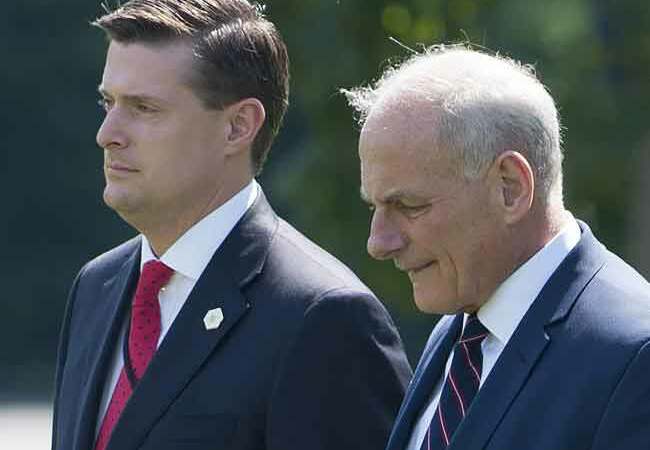 He supported former Fox News executive Roger Ailes, who since has died, as he faced harassment allegations. And after Fox fired popular talk show host Bill O'Reilly amid reports of payouts over harassment claims, Trump called him "a good person."

The president, meanwhile, has vociferously denied charges from more than a dozen women that he is guilty of sexual harassment or abuse.

Trump made no mention of the women or the abuse allegations when he spoke about Porter at the White House on Friday.

"The President has shown through words and actions that he doesn't value women. It's not surprising that he doesn't believe survivors or understand the national conversation that is happening," Senator Kirsten Gillibrand, a Democrat, wrote on Twitter.

"The lives of survivors of sexual assault and domestic abuse are being shattered every day. If he wants due process for the over dozen sexual assault allegations against him, let us have Congressional hearings tomorrow. I would support that and my colleagues should too."

Trump's latest tweet comes at a time when many Republicans would prefer to see Trump keep the spotlight on a generally healthy economy and December's big tax cuts.

With key midterm elections approaching in November, they would also like to move away from the narrative of a White House in disarray.

But the president's latest comments suggest that this week's resignations - particularly Porter's - were jolting at the highest levels.

Porter worked directly with Kelly, the chief of staff, and was considered a skilled insider. Kelly's uneven response to the matter has raised questions about his own future.

An FBI background check last year had uncovered the allegations of abuse by Porter, and the agency refused to grant him a permanent security clearance, but he was allowed to remain in his job.

When those accusations became public on Tuesday - the British Daily Mail newspaper published a photo of one of Porter's ex-wives with a black eye - Kelly at first strongly defended his aide.

He later issued a statement condemning domestic violence and saying he was "shocked" by the new allegations.

He insisted to White House officials that he had quickly pushed Porter out once the allegations proved credible, The Washington Post reported.

Others in the White House told the newspaper that Kelly - who was installed in his current post in July to help bring order and stability to the White House - had known of the complaints since October.

Sexual misconduct claims have brought down a growing list of influential men in politics, the media, the entertainment industry and other sectors since the scandal over decades of alleged abuse by Hollywood mogul Harvey Weinstein erupted in October.