Parents urged to talk to children about sex

Girls as young as 10 years are coerced into unwanted sex or marriage, increasing their risks of unwanted pregnancies and sexually transmitted infections

Girls as young as 10 years are coerced into unwanted sex or marriage, increasing their risks of unwanted pregnancies and sexually transmitted infections

PIC: Speaker Kadaga (second-left) with other officials during the launch of the Live your Dream Campaign at Sheraton Hotel In Kampala recently. (Credit: Geoffrey Mutegeki)

KAMPALA- The speaker of Parliament, Rebecca Kadaga, has challenged Ugandans, especially parents to offer sex talks to their children as a way of fighting early marriages and teenage pregnancies.

While launching a campaign against early marriage dubbed Live Your Dream, Kadaga said many parents fear to talk to their children about sex and reproductive health.

The Live Your Dream campaign was launched on recently at Sheraton Hotel in Kampala.

Kadaga decried other forms of evils affecting young people in their bid to reach their full life potential.

Early marriage and teenage pregnancy are among the biggest evils plaguing the lives of young girls in the country.

Also early marriage figures are still high. Girls, as young as 10 years are coerced into unwanted sex or marriage, increasing their risks of unwanted pregnancies, unsafe abortions and sexually transmitted infections, as well as death or disability due to childbirth. 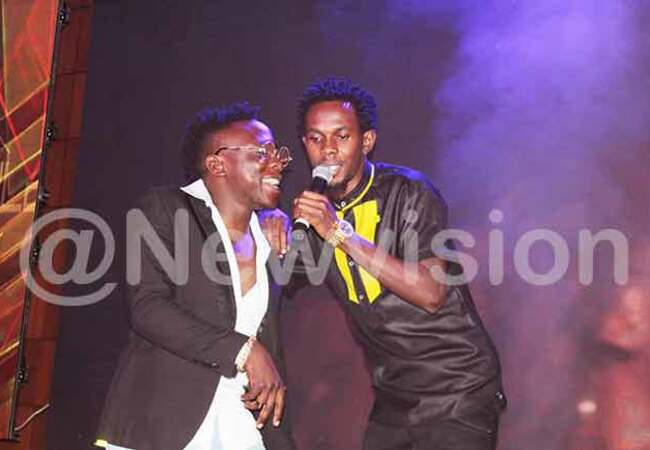 Singers Geosteady and Mun G entertaining guests during the event

According to Acheng, young people, especially girls aged between 15 and 24 continue to bear the brunt of new HIV infections.

The Swedish ambassador to Uganda, Per Lindgärde, said Sexual & Reproductive Health and Rights (SRHR) as well as gender equality is the foundation for sustainable development. He said he is proud to be one of the partners supporting the campaign.

"We need to take joint action to end this negative development, to end the disempowerment of girls and young women in Uganda," Lindgärde said.

The campaign is being supported by the United Nations Population Fund (UNFPA), Swedish Embassy and the Korean Embassy.

A song dubbed Baleke (Let them grow), which was composed by artistes such as MunG, Geosteady, Nava Gray, Navio and Nutty Neithan, was performed during the launch.

It targets young people (10-24) and women of reproductive age (15-45) and their partners, with an aim of increasing access to and utilisation of family planning, HIV and maternal health services.

The campaign is guided by four components.

Live your dream by choosing Books before Babies: keeping girls in school, getting proper education about SRHR and avoiding teenage pregnancies and HIV

Live your dream by bringing generations together (Generation for generation - G4G), sharing the wisdom of the elderly with the energies of the youth.)