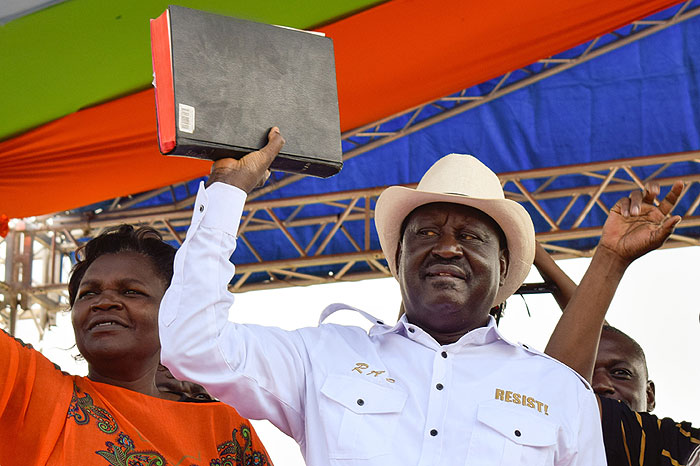 PIC: A number of local TV stations were shut down for showing the mock inauguration of Raila Odinga. (AFP)

Kenya's leading private TV station Citizen TV was back on air Thursday a week after authorities suspended it and two other broadcasters for showing the mock inauguration of opposition leader Raila Odinga as president.

Citizen TV resumed broadcasting three days after two of its private rivals, NTV and KTN News, who had likewise ignored a government injunction against showing the January 30 Odinga ceremony.

The channel returned a day after Kenya's Chief Justice criticised the government for defying a number of court orders which he said placed the rule of law under threat.

In a rare public statement David Maraga -- who rose to international attention last September when he annulled Kenya's presidential election -- warned the government's refusal to comply with various court orders over the last week was "at odds with Kenya's constitutional outlook" and undermined the integrity of the judicial system.

Maraga did not specify which orders he was referring to but a High Court ruling last Friday suspending the government's order for the broadcasting shutdown, which it found arbitrary and repressive, had been ignored.

A series of court orders to present the arrested opposition firebrand Miguna Miguna before a judge were also ignored in recent days, as well as orders to release him on bail.

Eventually Miguna was deported to Canada late on Tuesday, in defiance of the High Court judge Luka Kimaru.

Odinga, 73, had taken the oath as the "people's president" as part of a campaign of civil disobedience which saw his camp refuse to recognise last year's election victory by Uhuru Kenyatta.

Kenyatta won a second term after winning an election re-run in October that the main opposition boycotted.

A day after the mock inauguration ceremony, Interior Minister Fred Matiang'i slammed what he termed an attempt to overthrow the "legally constituted" government and slammed media for promoting Odinga's "illegal act."

International organisations, including the United Nations, had voiced concern over the media shutdown as a blow against civil liberties.