Gains in malaria fight since 1986

Uganda has made tremendous progress in the reduction of malaria prevalence from 63%  (Uganda Demographic and Health Survey 2006) to 19%, according to the Malaria Indicator Survey 2014.

According to Dr Jimmy Opigo, the head of the malaria control programme at the health ministry, malaria in the 1960s and early 1970s was effectively controlled.

"There was the malaria control gang in parishes that would identify mosquito breeding places and destroy them," Opigo says.

However, in between the1970s and 1980s, Uganda lost the fight and malaria prevalence rose to over 60%. Due to the high prevalence, there was no need to test for malaria when someone presented with fever. People would opt for self-medication instead of going to hospital.

Aside, there was no rapid diagnostic test and laboratories in hospitals used microscopes to test for malaria.

In the late 1990s, there was an interest in malaria control. The concept of roll back malaria was born. Countries were encouraged to prioritise and work on malaria, Opigo says.

To achieve the target, countries decided to form a global fund. Prof. Vinand Nantulya, who was the senior health advisor at the global fund secretariat in Geneva, Switzerland, says although the global fund idea was incubated in 2000 due to the outcry on HIV/AIDS problem, the funds were also channelled to malaria fight as it had become a challenge in Africa.

"Malaria was a challenge because of drug resistance against chloroquine. To change from chloroquine meant a huge cost, which the Ugandan government could not afford," Nantulya says.

He says the global fund provided a source of funding that drove African countries to move away from chloroquine to the new treatment Artemisine combination therapy in 2002, which is currently used in Uganda.

In the same breath, Opigo affirms that with the global tools (funds) available, rapid diagnostic test kits and insecticide treated mosquito nets were provided to the community.

In 2003, HOMAPACK anti-malarial drugs were introduced. Pharmaceutical factories in Kampala made anti-malarial medicine labelled HOMAPACK, which the village health team (VHTs) would give out in the community under the Integrated Case Management for Malaria.

"There was no need of waiting for patients to go to the health facilities. Instead, VHTs would move around giving medicine without testing," he recalls.

Because most people seek treatment from private facilities, the government has subsidised anti-malarial drugs in the private sector by paying 70% of the cost at the factory level. The patient only pays 30% of the cost. The medicines cost between sh3,000 and sh5,000 instead of sh20,000. 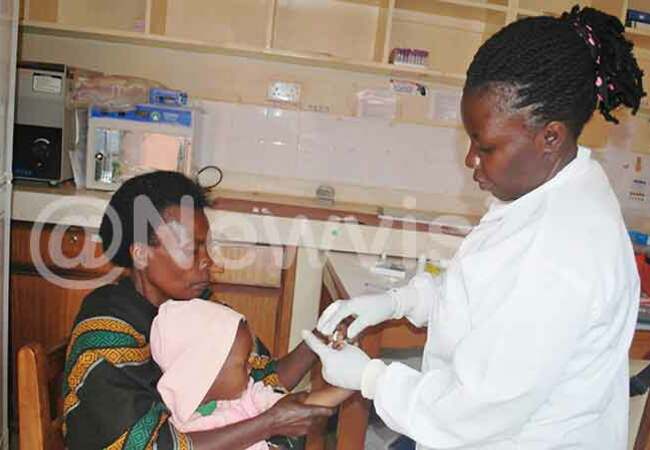 Testing for malaria helps treat and prevent the disease

In the 1990s, Uganda committed to the reduction of malaria. This, according to Dr. Bawson Mbulamberi, the assistant commissioner for health services at the health ministry by then was done through the formation of the national malaria control programme, which never existed.

Mbulamberi says the Ministry of Health did not have a central role to play. Malaria control was left to individual districts to decide what to do.

Later, the ministry decided to put in place the central malaria control programme based at the health ministry headquarters with funding from donor communities, for instance, the World Health Organisation (WHO).

"One of the major roles was to mobilise districts by sensitising them through workshops and seminars to ensure they control malaria," Mbulamberi explains.

Another programme to ensure quality in the services delivered by the Ministry of Health was set up. The programme officials, headed by Prof. Francis Omaswa, visited districts after three months.

Mbulamberi says the establishment of the national malaria control programme helped to have an organised structure as opposed to where donors were more interested in research than prevention and control of malaria.

In addition, the health ministry formed the malaria control policy, which stipulated what needed to be done and with which resources. For example, attaching better technologies of treating malaria through introduction of treated mosquito nets and indoor residual spray. Also,  chloroquine, quinine and fansidar were abandoned and coartem introduced. A detailed research on larvicide was also done.

The ministry also created a special budget line of sh120b per year to buy malaria drugs. In addition, a budget line for indoor residual spray was created.

The Government joined the African Leaders Malaria Alliance (ALMA), where countries and their leaders ensured they score highly in the fight against malaria and Uganda is part of the mechanism. 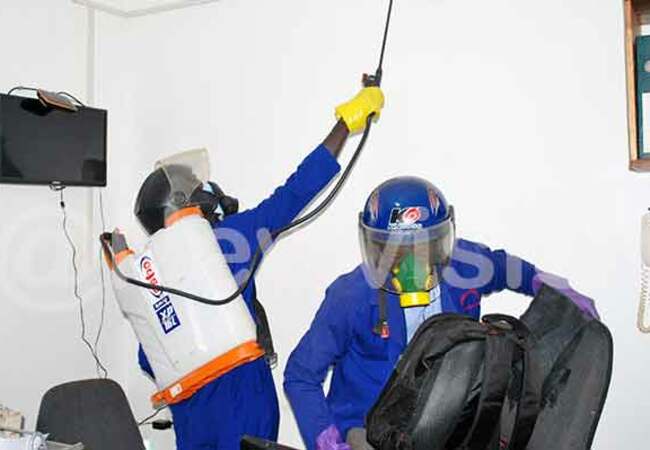 Indoor residual spraying is one of the preventive measures against malaria

In the last 20 years, Uganda has made tremendous progress in the reduction of malaria prevalence from 63% (UDHS 2006) down to 19% according to the malaria Indicator survey 2014.

Although data from 2016 UDHS shows that the national mosquito net usage stands at 78%, there is still a lot of mosquito net misuse accounting for 22%.  Not seeking treatment in time is the other challenge.

"Eradicating a disease does not only require service delivery, but also takes response from the community. For instance, it would be a problem if the medicines are available, but people do not come for treatment," Opigo explains.

Dr. Opigo says the health ministry has a strategic plan to reduce malaria prevalence to 7% (30 per 1,000 cases) by 2020. Additionally, they want to create malaria-free zones where all institutions; schools, hospitals, tourist centres are malaria-free.

Next month , the Government is engaging a new gear of mass action against Malaria. This will include a multi-sectoral malaria control where all sectors take action. There should also be decentralisation of malaria action in all districts.

Opigo says the elimination of malaria to near zero calls for action by all individuals; where everybody sleeps under a treated mosquito net, tests and seeks treatment.  The private sector should be brought on board to provide full scale malaria support.

According to Opigo, the prime minister's service delivery unit has chosen malaria to be priority that the Government is focusing on. President Yoweri Museveni has directed key leaders, including traditional and church leaders to participate and promote the malaria fight.

One dead as gunmen invade family

Missing child found dead with her arm, head chopped off