His nine goals comfortably surpassed the previous record of five from Zambian Given Singuluma.

His nine goals comfortably surpassed the previous record of five from Zambian Given Singuluma.

Ayoub el Kaabi scored his ninth goal of the 2018 African Nations Championship (CHAN) as Morocco became the first hosts to triumph by thrashing 10-man Nigeria 4-0 Sunday in a Casablanca downpour.

With Nigeria in disarray and the final long over as a contest, the previously little known striker completed his record-extending goal haul by firing into the net from close range.

Zakaria Hadraf put the home team ahead at Stade Mohammed V on the stroke of half-time and added the match-clinching third goal midway through the second half.

In between the first goals of the tournament for Hadraf, fellow midfielder Mohamed el Karti netted soon after Nigerian attacker Eneji Moses was red-carded following a second caution.

Before the biennial tournament kicked off last month, Achraf Bencharki from 2017 CAF Champions League winners Wydad Casablanca was the centre of attention.

His five goals were instrumental in the success of Wydad and he was expected to spearhead the Moroccan CHAN challenge.

But Bencharki was a shock absentee from the line-up for the tournament opener while lone striker El Kaabi bagged a brace in a 4-0 mauling of Mauritania.

He followed up with a hat-trick -- only the third in the history of the tournament -- against Guinea, put one past Namibia and scored twice in the semi-final victory over Libya. 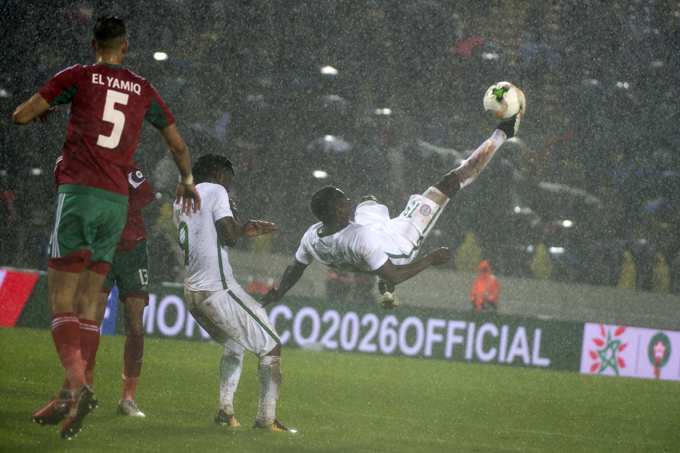 His nine goals comfortably surpassed the previous record of five from Zambian Given Singuluma in the first CHAN finals nine years ago.

After his CHAN exploits, national coach Herve Renard is likely to give the 24-year-old a chance as Morocco prepare to face Iran, Portugal and Spain at the 2018 World Cup in Russia.

The destruction of Nigeria created a record winning margin for a CHAN final, bettering the three-goal victories of Tunisia and the Democratic Republic of Congo.

Morocco pocketed a record $1.25 million (about one million euros) having justified their pre-tournament role as favourites to win the fifth CHAN.

Sudan performed best of the four previous host nations, finishing third. Rwanda reached the quarter-finals and the Ivory Coast and South Africa exited after the first round.

The only blemish was partly self-inflicted as they fielded a virtual reserve side in a goalless draw with Sudan after both nations had secured last-eight places.

El Kaabi had a goal disallowed and struck the woodwork before Hadraf sidefooted a cut-back between the legs of goalkeeper Oladele Ajiboye for a 45th-minute lead.

After Moses had been sent off, Morocco took control and Nigeria fell apart with some comical defending contributing to their downfall.

El Karti made it 2-0 just past the hour, Hadraf completed his brace three minutes later and player-of-the-tournament El Kaabi completed the rout with 73 minutes gone.