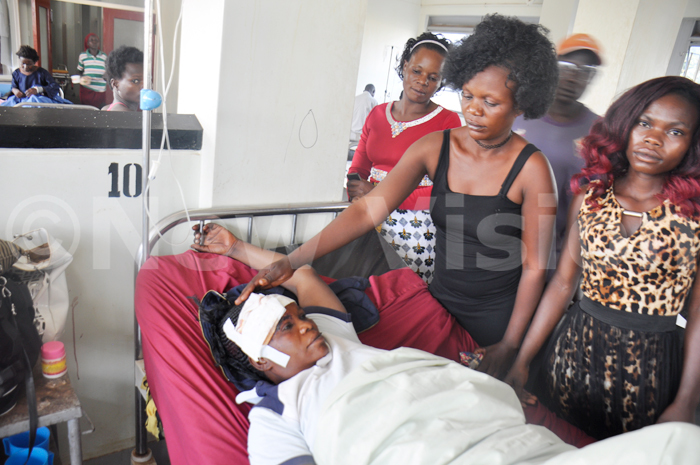 PIC: One of the survivors being attended to at Bugiri Main Hospital

BUGIRI - Four traders died instantly and 20 others with injuries after a  speeding lorry they were travelling in collided with a tractor at Kimbimba Rice Scheme on the Bugiri-Busia highway on Thursday.

The traders were taking merchandise to the Busia border market for sale.

The accident happened at around 9:30a.m

According to a survivor,Grace Athieno, the driver of the FUSO lorry registration number UAS938W tried to avoid knocking a pedestrian and rammed into the trailer belonging to TILDA rice factory.

Athieno admited that some of the passengers had asked the driver to speed up so that they can arrive in time conduct their business in the market.

Majority of the injured who were seated atop thelorry got fractures and bruises.

The injured are currently admitted at Bugiri main hospital.

Rescuers, who rushed to the scene took advantage of the situation to loot the traders properties, who were torn between the physical pain and losses of their merchandise.

The wreckage of the two vehicles were towed to Bugiri Central Police Station as investigations into the matter were underway.

The district Police commander of Bugiri,Godfrey Musimami, said investigations are underway to establish the cause of the accident.

Kimbimba swamp has during the past years been a hot spot for accidents.

A total of 13 people died at the similar spot last year in road accidents.