KABALE - Authorities from the National Agricultural Advisory (NAADS) and the Operation Wealth Creation (OWC) have faulted the poor mindset of farmers in Kabale district for their limited benefits from government programmes.

This was revealed during the a field visit from stakeholders in the OWC and NAADS secretariat to selected beneficiary farmers in  Kabale district at the start of the two days annual review mission on Monday.

Muhanguzi said if farmers use the existing farm products, they can be able to avail themselves the necessary farming requirements for improved production.

"If the Government gives you either an animal or crops, it is good for you to put them to the rightful use and own the project in order to benefit from it, otherwise, if our farmers keep on looking at what more the Government can do for them even after such offers, they may not yield much," said Muhanguzi.

Everest Mulumba, the agribusiness development officer from NAADS, asked farmers who are still struggling with improving their farms to seek advice from successful colleagues.

"In this field, we observed that there are chances of farmers getting the best from their produce if they learn basic means of production. For example, one farmer shared with us how he uses the milk he gets from his cows to meet farming expenses and other necessisities," he said.

Mulumba said through NAADS and OWC, the Government gave farmers the starting point to their success and if they manage their farms well, they will have helped themselves attain the preferred development goals.

This year's NAADS review mission is organised under the theme, "Transformation of agriculture sector through value chain development for increased household income and food security.

Successful farmers tell tales of triumph;
John Kaliisa, a dairy farmer from Mwanjari ward in central division, Kabale municipality, received a heifer in the OWC in May, 2015.

Currently, Kaliisa is hopeful of another delivery since it recently conceived.

Kaliisa said since he got this cow, life has never been the same for him as he is able to get enough milk to sustain his family and meet the other farm expenses.

"I get eight litres of milk in the morning and six in the afternoon from my cow. Four of these are consumed by the calf and the rest is sold to get money to meet my farm's expenses," Kaliisa says. 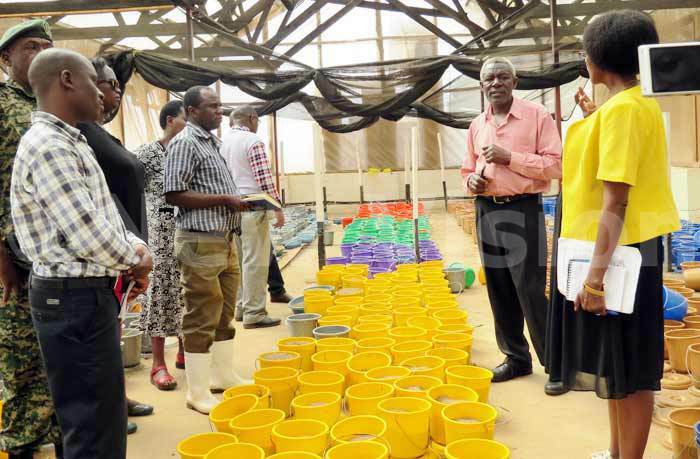 Charles Byaruhanga (second-right) addressing officials at his greenhouse on Monday

He said that his biggest challenge is the cost of drugs to treat it whenever it gets a complication since most drugs are expensive.

Tomas Rwomushana, a fish farmer from Kitumba sub-county said he was able to engage in fish farming after realising that part of his land was too wet to accommodate any other farm.

Rwomushana says fish rearing is one of his desirable agricultural activities since after harvesting; he gets a good amount of money to help him meet his daily needs.

"The kind of fish I get weighs 1kg and I sell each at sh10,000, which is not a bad income for a farmer," Rwomushana adds.


Byaruhanga's opened up his greenhouse in 2015 and since its inception; he has been supplying potato seeds to other farmers through the OWC programme to help the other farmers get improved production.


"Modern and improved potato species are so important in farming since they can have improved production and are disease-resistant," he said.