KJT dump URA FC out of Uganda Cup
Next Story

Arsene Wenger's Arsenal have won only one of their last five league games.

Arsene Wenger's Arsenal have won only one of their last five league games.

Petr Cech's awful mistake and two goals from Sam Clucas condemned Arsenal to a shock 3-1 defeat at Swansea as the resurgent hosts climbed out of the Premier League relegation zone on Tuesday.

Nacho Monreal had put Arsenal 1-0 up, but Clucas levelled before the midfielder sealed the victory with Swansea's third goal in the 86th minute.

The result leaves Gunners manager Arsene Wenger still searching for his first away win of 2018, despite a debut for substitute Henrikh Mkhitaryan following his move from Manchester United.

Arsenal have won only one of their last five league games.

With Liverpool winning at Huddersfield, sixth-placed Arsenal are now languishing eight points adrift of the top four, leaving them with an uphill task to qualify for next season's Champions League.

The result also completes remarkable back-to-back victories for Swansea, who have transformed their season with three wins in five league games under new boss Carlos Carvalhal.

Emboldened by their dramatic victory over Liverpool, Swansea pressed Arsenal in the early stages and immediately created opportunities.

A long ball from Kyle Naughton was taken on by Nathan Dyer and when the winger found Ayew his deflected shot screwed past the post with Cech stranded.

Dyer's service then caused further panic for Arsenal in their goalmouth and it needed a smothering block by Hector Bellerin to deny Alfie Mawson as he lunged at the far post.

Arsenal settled and enjoyed extended periods of possession, but were unable to create openings and appeared vulnerable when the home side counter-attacked from deep.

Only a late tackle by Gunners defender Mohamed Elneny prevented Clucas from surging through inside the box in the 15th minute, but the Swansea appeals for a penalty looked optimistic at best. 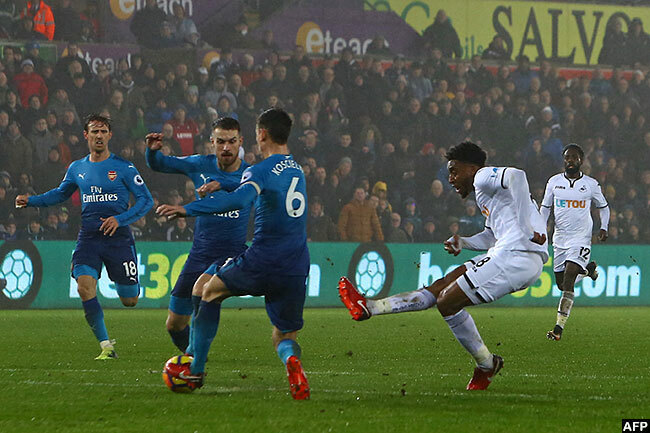 Arsenal continued to appear vulnerable, but just when it appeared they were likely to fall behind they took the lead through a classy goal from Monreal after 33 minutes.

Mesut Ozil played a teasing cross to the far post and Monreal had read the German's intentions, arriving late to steer the ball past Lukasz Fabianski for his fourth goal of the season.

It may have been far less than Swansea deserved, but within a minute they were level through Clucas.

Ozil was guilty of being shrugged off the ball too easily in his own half, enabling Mawson to carry the ball forward.

The centre-back slipped a neat pass to Clucas who drew the keeper and fired home the equaliser.

It should have got worse for Arsenal moments later when Leroy Fer beat two players on a swift charge out of defence, but the Dutchman then finished with a tame shot, comfortably saved by Cech.

The second half followed much the same pattern as the first, with Swansea content to soak up pressure from an ineffective Arsenal and break from turnovers.

Wenger sent on Mkhitaryan for his debut just past the hour, but the Armenian had no time to touch the ball before Swansea took a dramatic lead through Ayew.

There appeared to be no hint of danger for Cech when Shkodran Mustafi played the ball back, but the keeper sliced his clearance straight to Ayew and the striker made him pay dearly for his error.

Arsenal looked ragged and almost fell further behind when Dyer hit a shot that skimmed the base of the post.

With four minutes left, Clucas made it a miserable night for Wenger when he scored at the near post following a surging run by Ayew.