PIC: Czech President Milos Zeman (centre) is accompanied by his wife Ivana (right) as he casts his ballot at a polling station in Prague on Friday, during the second round of presidential elections in the Czech Republic. (Credit: AFP)

CZECH REPUBLIC - Czechs were set to pick their new president Saturday in a face-off between pro-Russian incumbent Milos Zeman and liberal pro-European rival Jiri Drahos on the last day of a vote that promises to go down to the wire.

Bookmakers have given veteran populist Zeman the edge, but recent polls have shown the two candidates neck and neck.

"This is a showdown between two completely different candidates representing two parts of a rather split society," political analyst Tomas Lebeda told AFP, pointing to deep division on immigration and Czech foreign policy.

Voting in Prague, Zeman slammed political novice Drahos, dubbing him a rival "who has not dealt with politics yet", while Drahos hailed the social "energy" generated by the elections and vowed it would "not be wasted, whatever the outcome".

Known for his pro-Chinese and anti-Muslim stance, Zeman took pole position in a field of nine candidates in the first round on January 12-13, garnering 38.56% of the vote against 26.60% for Drahos.

Voting at a Prague school, Blanka Kotenova told AFP the election was all about decency, freedom, "being in the EU, and if possible, working in the EU, not just complaining".

Another Prague voter Lubos Horcic told AFP he was backing Drahos because "he will work to reconcile society and not divide it like Comrade Zeman", adding that Drahos was "moving towards Europe and the West and not towards the East".

But fellow voter Daniel Hajek said he would choose the "experienced Milos Zeman because he is opening the door to economic co-operation with countries such as Russia and China.

"It is important for us, for jobs; our country is at the heart of Europe - we cannot go in just one direction," he told AFP in Prague.

Europe's fifth biggest carmaker is dependent on auto exports, mainly to the eurozone, and its economy is expected to expand by 3.4 percent this year.

The run-off vote comes amid a wider political crisis as billionaire populist Prime Minister Andrej Babis is fighting police charges of EU subsidy fraud that are hampering his ability to form a government.

Even though the country of 10.6 million people has only received 12 migrants under the EU quota system, migration was a key campaign issue. 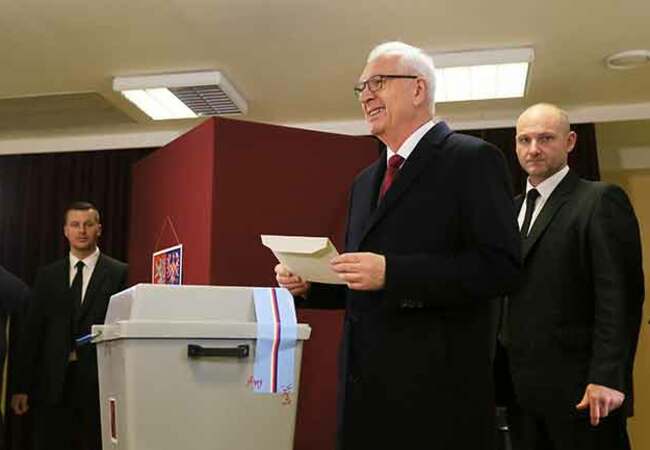 Czech presidential candidate Jiri Drahos (centre) casts his ballot at a polling station in Prague's Lysolaje district on Friday, during the second round of presidential elections in the Czech Republic.

Zeman once called the 2015 migrant crisis "an organised invasion" of Europe, claiming Muslims were "impossible to integrate".

Billboards across the Czech Republic sought to appeal to voters with anti-migrant messages: "Stop immigrants and Drahos. This is our country. Vote Zeman!"

Zeman has also repeatedly called on the EU to lift its sanctions on Russia over its 2014 takeover of Crimea from Ukraine.

Running under the slogan "Decency is a strength," Drahos, a 68-year-old former head of the Czech Academy of Sciences and a professor of chemical engineering, could not be more different.

A mild-mannered centrist whom critics have branded "wishy-washy", Drahos wants Prague to "play a more active role in the EU" and backs joining the eurozone.

He is also a critic of the refugee quota system, but insists the Czech Republic is strong enough to accept its allotted 2,600 refugees. This earned him scorn in pro-Zeman media and on social networks.

Drahos has denied allegations of paedophilia and having been a communist police agent, suggesting the accusations were a smear campaign by Russian intelligence with links to Zeman.

The constitution allows the president to name the prime minister and government, central bank board members, judges and university professors, and to sign bills passed by parliament into laws.

Voter turnout stood at 50% at the close of voting on Friday, according to Czech TV.

Polling stations re-open at 0700 GMT Saturday before closing at 1300, with partial results expected to begin arriving shortly after.

Germany to send 650 troops to Mali to relieve France